Today at the local airport ...

Posted by Steve Douglass at 5:36 PM No comments: 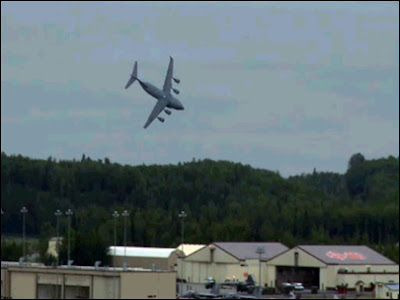 ANCHORAGE, Alaska (AP) - A pilot's overly aggressive maneuvering and overconfidence were blamed in an investigative report on a C-17 plane crash at an Anchorage military base that killed all four airmen on board.

Besides pilot error, the crew on board was also faulted for failing to notice the dangerous situation that culminated with the plane stalling and crashing into some woods July 28 at Joint Base Elmendorf-Richardson.

"The mishap pilot violated regulatory provisions and multiple flight manual procedures, placing the aircraft outside established flight parameters at an attitude and altitude where recovery was not possible," the report's executive summary says.

Bob Hall, a base spokesman, said Friday evening he didn't know which of the three pilots was at the controls when the massive $184 million plane crashed during a training demonstration for an air show. A Pacific Air Forces spokeswoman also said the pilot's identity would not be disclosed out of sensitivity to the families.

"Who sat where in the plane is not being released," said Capt. Alysia Harvey.

Pacific Air Forces, based at Joint Base Pearl Harbor-Hickam in Hawaii, released the results of its investigation Friday evening.

The probe "found clear and convincing evidence the cause of the mishap was pilot error," the report says. It also found evidence that other factors including overconfidence and misplaced motivation contributed to the crash.

"Furthermore, the mishap co-pilot and mishap safety observer did not realize the developing dangerous situation and failed to make appropriate inputs."

When the stall warning sounded, the co-pilot responded by saying "temperature, altitude lookin' good," according to the report.

According to investigators - and video prior to the crash - the pilot made an aggressive right turn after the C-17's initial climb-out and left turn. The stall-warning system was activated as the plane banked, but the pilot continued the turn and there was no way to avoid a stall.

"Although the pilot eventually attempted to recover the aircraft, he employed incorrect procedures, and there was not sufficient altitude to regain controlled flight," the report says.

The C-17 crashed into a wooded area about a minute after taking off, sending a fireball hundreds of feet into the air and damaging a section of the Alaska Railroad's main track.

READ THE FULL STORY HERE
Posted by Steve Douglass at 7:40 AM No comments: