ADAM GOLDMAN, EILEEN SULLIVAN, and MATT APUZZO, Associated Press
WASHINGTON (AP) — Over the past three years, al-Qaida bomb makers in Yemen have developed three fiendishly clever devices in hopes of attacking airplanes in the skies above the United States.
First, there was the underwear bomb that fizzled over Detroit on Christmas 2009. Next, terrorists hid bombs inside printer cartridges and got them on board cargo planes in 2010, only to watch authorities find and defuse them in the nick of time.
Then last month, officials say, al-Qaida completed a sophisticated new, nonmetallic underwear bomb — and unwittingly handed it over to the CIA.
The would-be suicide bomber, the man al-Qaida entrusted with its latest device, actually was a double agent working with the CIA and Saudi intelligence agencies, officials said Tuesday. Instead of sneaking it onto a plane in his underwear, he delivered it to the U.S. government and handed al-Qaida its latest setback.
The extraordinary intelligence operation was confirmed by U.S. and Yemeni officials who were briefed on the plot but spoke on condition of anonymity because they were not authorized to discuss it.
The FBI is still analyzing the explosive but officials described it as an upgrade over the Christmas Day bomb. This new device contained lead azide, a chemical known as a reliable detonator. After the Christmas attack failed, al-Qaida used lead azide as the detonator in the 2010 plot against cargo planes.
Security procedures at U.S. airports Tuesday remained unchanged despite the plot, a reflection of both the U.S. confidence in its security systems and a recognition that the government can't realistically expect travelers to endure much more. Increased costs and delays to airlines and shipping companies from new security measures could have a global economic impact too.
Security officials said they believe airport security systems put in place in the United States in recent years could have detected the new device or one like it. But the attempt served as a stark reminder that security overseas is quite different.
"I would not expect any real changes for the traveling public," House Intelligence Committee Chairman Mike Rogers, R-Mich., said. "There is a concern that overseas security doesn't match ours. That's an ongoing challenge."
While airline checks in the United States mean passing through an onerous, sometimes embarrassing series of pat-downs and body scans, procedures overseas can be a mixed bag. The U.S. cannot force other countries to permanently adopt the expensive and intrusive measures that have become common in American airports over the past decade.
The Transportation Security Administration sent advice Tuesday to some international air carriers and airports about security measures that might stave off an attack from a hidden explosive. It's the same advice the U.S. has issued before, but there was a thought that it might get new attention in light of the foiled plot.
The U.S. has worked for years to try to improve security for U.S.-bound flights originating at international airports. And many countries agree that security needs to be better. But while plots such as the Christmas attack have spurred changes, some security gaps that have been closed in the U.S. remain open overseas.
Officials believe body scanners, for instance, probably would have detected this latest attempt by al-Qaida to bring down a jetliner. Such scanners allow screeners to see objects hidden beneath a passenger's clothes.
But while scanners are in place in airports nationwide, their use is scattershot overseas. Even in security-conscious Europe, the European Union has not required full-body imaging machines for all airports, though a number of major airports in Paris, London, Frankfurt, Germany and elsewhere use them.
All passengers on U.S.-bound flights are checked against terrorist watch lists and law enforcement databases.
In some countries, U.S. officials are stationed in airports to offer advice on security matters. In some cases, though, the U.S. can do little more than hope that other countries follow the security advice from the Transportation Security Administration.
"Even if our technology is good enough to spot it, the technology is still in human hands and we are inherently fallible," said Rep. Adam Schiff, D-Calif., a member of the House Intelligence Committee. "And overseas, we have varying degrees of security depending on where the flight originates."
Authorities believe that, like the Christmas bomb and the printer bombs, this latest device is the handiwork of either al-Qaida's master bomb maker in Yemen, Ibrahim Hassan al-Asiri, or one of his students.
In the meantime, Americans traveled Tuesday with little apparent concern.
"We were nervous — for a minute," said Nan Gartner, a retiree on her way to Italy from New York's John F. Kennedy Airport. "But then we thought, we aren't going anywhere near Yemen, so we're OK."
___
Associated Press writers Kimberly Dozier, Ted Bridis, Bob Burns, Bradley Klapper and Alan Fram in Washington, Ahmed Al-Haj in Sanaa, Yemen, Verena Dobnik in New York, Paisley Dodds in London, Matthew Lee in New Delhi and Slobodan Lekic in Brussels contributed to this report.
Posted by Steve Douglass at 6:16 PM No comments: 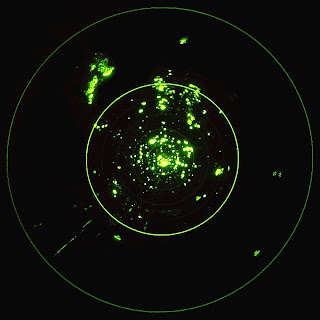 Jakarta, Indonesia (CNN) -- A Russian passenger airliner went missing Wednesday after it disappeared from radar screens over a mountainous region of Indonesia.
The Sukhoi Superjet 100, Russia's newest civilian airliner, was carrying 42 passengers and eight Russian crew members, said Sunaryo, an official with Sukhoi's Indonesian agent, Trimarga Rekatama.
However, the number was in dispute. The Indonesian National Search and Rescue Agency said only 37 of the 42 invited passengers were on board. Russian state-run news agencies reported 44 people were on the plane.
The plane was on its second demonstration flight Wednesday when it lost contact with air controllers at Jakarta's Halim Perdanakusuma Airport.
"The first demonstration flight in the morning went smoothly," said Sunaryo, who uses only one name. "There were no problems."
On the second flight, the plane began making its descent but vanished from radar screens at 6,200 feet in a mountainous area.
The plane lost contact with air traffic controllers at 2:12 p.m., 21 minutes after taking off, said Marsda Daryatmo, head of the search and rescue agency. Two helicopters were immediately sent out to search for the plane but had to return to their bases due to strong winds and unpredictable weather.
Ground teams were continuing to search. The air search will resume at daylight, depending on the weather, Daryatmo said.
The plane was flying over Mount Salak, a volcano south of Jakarta, and was presumed to have crashed.
The Sukhoi jet arrived in Jakarta as part of a demonstration tour of six Asian countries. It had been to Myanmar, Pakistan and Kazakhstan, and was due to visit Laos and Vietnam after Indonesia, said the Russian news agency RIA Novosti.
Sukhoi manufactures military aircraft and is known especially for its fighter jets. Its civilian aircraft is narrow-bodied with a dual-class cabin that can transport 100 passengers over regional routes. It flew its maiden flight in 2008.
In March, a Superjet 100 operated by Russia's Aeroflot Airlines was forced to abandon its flight to Astrakhan, Russia, and return to Moscow because of problems with the undercarriage, according to RIA Novosti.
A similar defect in another Aeroflot-operated Superjet 100 plane had to be fixed in Minsk in December.
Russia's state-run United Aircraft Corp. said the defect did not affect passenger safety.
Posted by Steve Douglass at 3:03 PM No comments: