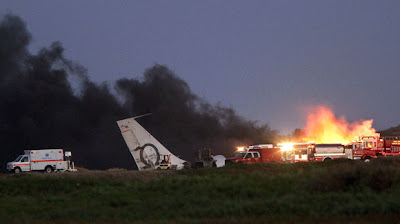 The Boeing 707 aircraft was nearly filled to capacity with 150,000 pounds of fuel that stoked intense flames and thick clouds of dark smoke that billowed for miles as firefighters tried to control the blaze, officials said.


A base spokesman said the crew members — a pilot, co-pilot and navigator — worked for Omega Aerial Refueling Services, which contracts with the Navy to refuel aircraft. They were taken to area hospitals with non-life-threatening injuries, according to the Ventura County Fire Department.

The blaze broke out about 5:25 p.m. as the aircraft skidded out of control on the far end of the main runway, said Vance Vasquez, a spokesman for the base.

Fire crews on the ground were being aided by a helicopter that made repeated water drops as flames consumed the crumpled fuselage. Base fire crews and the Ventura County Fire Department were on the scene.

Although the exact age of the downed aircraft was not known, aerial refueling tankers have been a sore subject for the military for years. The massive aircraft, which are used to refuel warplanes while in flight, have been heavily criticized for being run-down and corroded. .

The Air Force has been trying to replace its fleet of aerial tankers — many of which were built during the Eisenhower administration — for more than a decade.

READ THE FULL STORY HERE AT THE LA TIMES
Posted by Steve Douglass at 5:37 AM No comments: