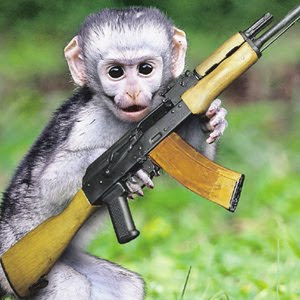 Taliban terrorists have a secret weapon to destroy the infidel American enemy — monkey marksmen.
According to The People’s Daily in China, the Taliban in Afghanistan is “training monkeys to use weapons to attack American troops.

The newspaper’s bizarre story says the Islamic insurgents have drafted macaques and baboons to be all that they can be, arming them with AK-47 rifles, machine guns and trench mortars in the Waziristan tribal region near the border between Pakistan and Afghanistan.

The monkeys, being rewarded with bananas and peanuts, are being turned into snipers at a secret Taliban training base.

The newspaper says “photos have been widely spread by media agencies and Web sites across the world.”

One of those sites is the Pakistan Defense Forum, which has pictures of gun-toting monkeys, and makes the wild claim that a monkey-soldier program was first launched by the CIA in Vietnam.
“Today, the Taliban forces have given the American troops some of their own medicine,” The People’s Daily said.
Posted by Steve Douglass at 6:08 AM No comments: