US Abraham Lincoln moves through Strait of Hormuz without incident 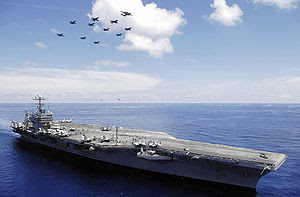 (CNN) -- Flanked by British and French ships, the USS Abraham Lincoln aircraft carrier moved through the Strait of Hormuz without incident Sunday despite recent threats from Iran.

The U.S. Naval Forces Central Command said in a statement that the Lincoln "completed a regular and routine transit of the strait ... to conduct maritime security operations." The Lincoln is in the region with the USS Carl Vinson, giving the U.S. Navy its standard two-carrier presence there.

A British defense ministry spokesman, who was not named per policy, said Sunday that the "HMS Argyll and a French vessel joined a U.S. carrier group" going through the strait "to underline the unwavering international commitment to maintaining rights of passage under international law."

"Britain maintains a constant presence in the region as part of our enduring contribution to Gulf security," the spokesman said.

Several weeks ago, as the USS John Stennis left the Persian Gulf and headed back to the western Pacific, Iranian officials warned the United States not to send in another carrier.

"We have always stated that there is no need for the forces belonging to the countries beyond this region to have a presence in the Persian Gulf," Brig. Gen. Ahmad Vahidi said in early January, according to the semi-official Fars News Agency. "Their presence does nothing but create mayhem, and we never wanted them to be present in the Persian Gulf."

Tehran has threatened to close the Strait of Hormuz, the only outlet to-and-from the Persian Gulf between Iran and the United Arab Emirates and Oman, as it faces increased scrutiny over its nuclear program and possible sanctions on its oil exports. The critical shipping lane had 17 million barrels of oil per day passing through in 2011, according to the U.S. Energy Information Agency.
Posted by Steve Douglass at 7:43 PM No comments: