CNN) -- Officials investigating a possible terror strike by Afghan nationals in New York searched on Wednesday the Denver, Colorado, apartment of an Afghan man who recently traveled to New York.


FBI agents search the apartment of Naijbullah Zazi on Wednesday in connection with a terror investigation.

The man, Naijbullah Zazi, was not at the Denver apartment when the FBI arrived. His attorney said earlier that Zazi had stayed in an apartment in New York that was raided this week.

As activity increased at the Denver apartment on Wednesday, FBI spokeswoman Kathleen Wright told CNN a search warrant was being executed. At least one law-enforcement dog could be seen, and agents were wearing hazardous material suits.

At least two women were brought out of the apartment. Agents evacuated the complex, which has about 12 units, as a precaution, the FBI said.

On Monday, several apartments in the New York borough of Queens were raided by investigators from the federal Joint Terrorism Task Force, sources close to the investigation said.

They were acting on suspicions that a cell of Afghan nationals associated with a New York-area mosque might be plotting to carry out a terrorist strike in New York. It's believed to be the first time Afghan nationals are suspected of involvement in a terror plot targeting the United States, a source with direct knowledge of the investigation said.

Don't Miss
Agents raid New York buildings in terror inquiry
Afghans were targets of New York terror raid
Zazi's attorney, Arthur Folsom, told CNN affiliate KUSA that Zazi stayed in one of the apartments that was raided. He said Zazi drove to New York from Denver to sort out a business issue and denied that Zazi has any ties to terrorism

Police stopped the shuttle limousine worker on the George Washington Bridge for what Zazi described as a "random drug stop," but he was cleared, Folsom said.

Later, Zazi's rental car was towed, supposedly for parking violations, Folsom said. While the car was impounded, police asked -- and Zazi granted -- permission to search it and a laptop computer inside. Both were returned to Zazi, who flew back to Denver.

Nothing was found in the Monday raids, according to the source, who added that the targets of the raid may have been "spooked" by publicity or the searches themselves. There also is growing concern that police may have "jumped the gun" and moved in too early, the source said.

However, the probe continues. Additional resources are being brought into New York to support the investigation, the source said.

A law enforcement source earlier said the FBI was looking at locations in the Denver area, where bomb-making materials may have been purchased. The source did not say who may have purchased the materials.

Folsom told KUSA he doesn't know why Zazi chose to drive the rental car to New York and fly back to Denver. But he insists Zazi is eager to answer any questions authorities might have.

"He loves this country," Folsom said. "He loves living here. That's why he brought his family over here. ... We want to clear any air of suspicion that may be surrounding his name at this point."

A man who told CNN he knows Zazi said Zazi stayed at his apartment one night while in New York. The man, who asked not to be identified, said he was taken in for questioning and released during the Monday raids.

READ THE FULL STORY HERE
Posted by Steve Douglass at 8:12 PM No comments: 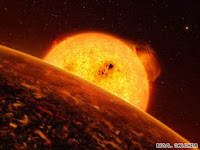 (CNN) -- Scientists have discovered the first confirmed Earthlike planet outside our solar system, they announced Wednesday.

"This is the first confirmed rocky planet in another system," astronomer Artie Hatzes told CNN, contrasting the solid planet with gaseous ones like Jupiter and Saturn.

But "Earthlike" is a relative term.

The planet's composition may be similar to that of Earth, but its environment is more like a vision of hell, the project's lead astronomer said.

Hatzes, explaining that one side of the body is always facing the star and the other side always faces away, said the side "facing the sun is probably molten. The other side could actually have ice" if there is water on the planet.

"We think it has no atmosphere to redistribute the heat," Hatzes told CNN from Barcelona, Spain, where he is attending the "Pathways Towards Habitable Planets" conference.

The astronomers were stunned to find a rocky planet so near a star, he said.

"We would have never dreamed you would find a rocky planet so close," he said. "Its year is less than one of our days."

The planet, known as CoRoT-7b, was detected early last year, but it took months of observation to determine that it had a composition roughly similar to Earth's, the European Southern Observatory said in a statement.

Astronomers were able to measure the dimensions of the planet by watching as it passed in front of the star it orbits, then carried out 70 hours of study of the planet's effect on its star to infer its weight.

With that information in hand, they were able to calculate its density -- and were thrilled with what they found, Hatzes said.

"What makes this exciting is you compare the density of this planet to the planets in our solar system, it's only Mercury, Venus and Earth that are similar," Hatzes, of the Thuringer observatory in Germany, told CNN.

They were helped by the fact that CoRoT-7b is relatively close to Earth -- about 500 light years away, in the constellation of Monoceros, the Unicorn.

"It's in our solar neighborhood," Hatzes said. "The thing that made it easier is it's relatively close, so it's relatively bright. If this star was much much farther away, we wouldn't have been able to do these measurements."

READ THE FULL STORY HERE
Posted by Steve Douglass at 2:16 PM No comments: