WASHINGTON (Reuters) - The Pentagon grounded six Lockheed Martin Corp F-35 fighter jets at a California air base due to a problem with the parachutes packed under the pilot's ejection seat, two sources familiar with the issue told Reuters.

Additional F-35 jets being flown at a U.S. Navy air station in Maryland are not affected because they use a different ejection seat, said the sources, who were not authorized to speak on the record.

Panetta gave no details, but Reuters has quoted sources familiar with the budget plans as saying the Pentagon will postpone buying an additional 179 F-35 jets over the next five years, pushing their procurement off until after fiscal 2017.


Richard Aboulafia, defense analyst with the Virginia-based Teal Group, said of the parachute problem, "There's a perception that they're moving too fast on production before ironing out all of the problems, and this is going to reinforce that perception."

The affected parachutes, manufactured by a privately owned British company, Martin Baker, were improperly folded and must be adjusted before the aircraft can resume test flights at Edwards Air Force Base in Southern California, said the sources.

The company also needs to swap out parachutes on F-35 jets at a Florida air base where the Air Force hopes to start training flights this summer, according to the sources.

No comment was immediately available from Lockheed or the Pentagon's F-35 program office.
Posted by Steve Douglass at 1:55 PM No comments: 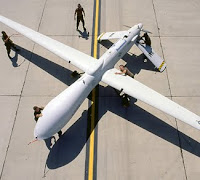 The missiles struck Abyan province near areas that have been taken over by Ansaar al-Sharia, a militant group with links to al Qaeda, three security officials officials said.
The militant group took over large parts of Abyan province in May after government forces evacuated a number of security posts and military bases. The group announced Abyan as an Islamic emirate and is calling for the implementation of Sharia law.

Hundreds of troops and militant fighters have been killed in the government's efforts to clear the province from the hands of the militants, according to Yemen's defense ministry.

Some residents in the area said they saw the aircraft in the attacks.
"The U.S. aircraft was flying in surprisingly low altitude Monday night. We were scared and expected a night of explosions and blood," said Mousa Abdul Kadoos Abu Ali, a resident of Lowder distict, an area in the province.

Two security officials said the drone was from the United States.
U.S. officials rarely discuss the drone program, though privately they have said the covert strikes are legal and an effective tactic in the fight against extremists. But President Barack Obama did speak about the controversial use of drone attacks Monday.
"Our ability to respect the sovereignty of other countries and to limit our incursions into somebody else's territory is enhanced by the fact that we are able to pinpoint-strike an al Qaeda operative in a place where the capacities of that military in that country may not be able to get them," the president said during a Google+ video chat room interview Monday.

He added that "drones have not caused a huge number of civilian casualties." He gave no indication that the U.S. policy of ordering drone strikes would change, at least as long as a terrorist threat remains.

"Al Qaeda has been really weakened, but we've still got a little more work to do," Obama said. "And we've got to make sure we are using all our capacities in order to deal with it."

In September, a CIA-operated drone attack in Yemen killed American cleric Anwar al-Awlaki, the external operations commander and chief recruiter of English-speaking militants for the al Qaeda in the Arabic Peninsula.
Posted by Steve Douglass at 5:20 AM No comments: