An April 11 MV-22B Osprey crash in Morocco occurred because the pilot committed a fundamental flying error which investigators have found was rendered irreversible by a tailwind neither he nor a second pilot in the cockpit noticed, AOL Defense has confirmed.

The Defense Department announced June 29 that the Marine Corps had ruled out any "mechanical or material failure" in the accident, in which two Marines were killed and the two pilots were injured.

"This wasn't a tiltrotor accident; it was bad flying," said a government source with detailed knowledge of the findings, which are still being reviewed by Marine Corps leaders.

Two military officers familiar with the findings separately confirmed that the pilot of the mishap aircraft started the sequence of events that culminated in the crash by violating an explicit instruction in the Osprey's flight manual.
Posted by Steve Douglass at 12:36 PM No comments: 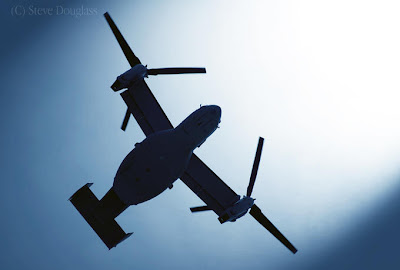 (Reuters) - Several countries are competing to become the first foreign buyer of the U.S. military's V-22 tilt-rotor aircraft, which flies like a plane but takes off and lands like a helicopter, according to the Marine Corps colonel who runs the program. Colonel Greg Masiello said officials from more than 12 countries, including eight air chiefs, got demonstration flights at the Farnborough International Airshow this week, as well as at the Royal International Air Tattoo, a huge military airshow in England last weekend. "We're ready, and the language that we're hearing from several of the customers is that they're ready and they're vying to be ... the first. That's not a bad position to be in," Masiello told Reuters in an interview as a Marine Corps version of the plane flew overhead. He said a first foreign purchase could be announced within the next year. Israel, the United Arab Emirates and Japan are among countries interested in buying the V-22, or Osprey, built by Boeing Co and Textron Inc's Bell Helicopter unit, Boeing officials told reporters earlier this week. Canada has also been mentioned as a possible buyer. Scott Donnelly, chief executive of Textron, told Reuters on Tuesday that Israel and the United Arab Emirates were the countries most often named as early buyers. Boeing and Bell have been trying to drum up foreign interest in the aircraft for years. But potential buyers have been waiting to see how the plane did in combat, as well as because of its relatively high purchase and use prices -- both of which are dropping. Washington is increasingly looking to foreign military sales to keep the cost of weapons systems from rising as the Pentagon cuts its own orders to strip $487 billion from its planned defense budgets over the next decade. In the case of the V-22 Osprey, Washington hopes foreign orders will keep the production line running past 2018. News of heightened interest in the V-22 comes amid reports of the plane's use in combat as the fleet approaches 150,000 flight hours and continued improvement in its readiness rate, Masiello said. Recent tests also proved the plane could be used on an aircraft carrier and underscored its ability to travel over 2,600 miles round-trip to carry out a simulated rescue. But there are also negatives, including two crashes this year and concerns raised by Japanese officials in Okinawa, who are concerned about the plane's use off their island. Compared with a helicopter, the plane is relatively expensive at about $67 million a copy. But it has far greater payload capabilities and much longer range. Masiello said his office was also pitching the plane for use by the Navy when it completes an analysis on how to replace its current fleet of C-2 aircraft, which are used to ferry supplies to aircraft carriers. The V22 attracted a great deal of interest at the Dubai air show last November and has turned out to be darling of this year's Farnborough air show as well. Masiello said Boeing and Bell would produce 39 V-22s this year and a peak of about 42 next year before tapering off production in subsequent years. That means foreign orders could easily be incorporated into the production plan. "All our indications are that this isn't chatter. There are serious talks and negotiations" with potential foreign buyers, Masiello said, adding that the possible orders would be for eight to 12 planes. Boeing, Bell and the Marines have also begun negotiating a second five-year, multibillion dollar deal for 98 copies of the plane, down from 174 planes in a first, $11 billion order. Masiello said the Pentagon had received the companies' offer. But he declined to give any pricing details, except to say that it included a pledge to ensure at least 10 percent in savings in the multi-year agreement versus a single-year deal. (Additional reporting by Paul Ingrassia; Editing by Dan Grebler)
Posted by Steve Douglass at 7:34 AM No comments: