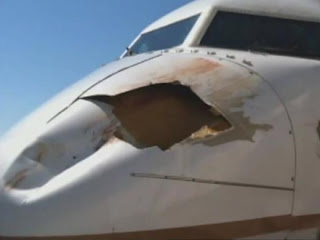 A United Airlines flight has landed safely after colliding with a bird as the plane approached Denver International Airport.

Flight 1475 from Dallas-Fort Worth came into contact with the bird Tuesday morning.
A United spokesman says no one was hurt. Denver TV stations showed images of the plane with a large dent just below a hole in the nose.

"It's always dangerous when an aircraft hits a bird. In this case, it was something that the crews have been trained to handle. The aircraft has redundant systems that can take care of the problems caused by this bird strike," said Col. Stephen Ganyard.