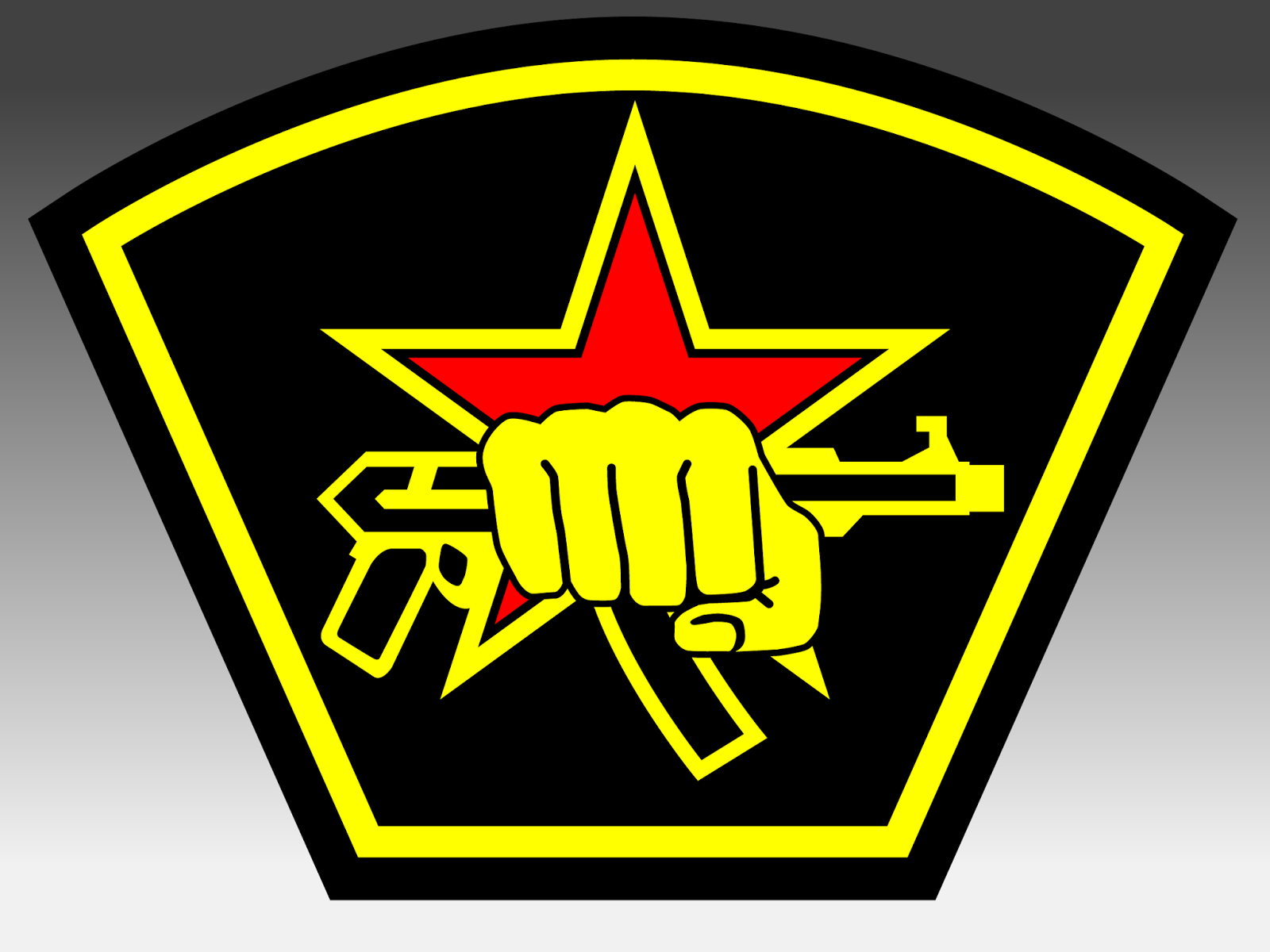 WASHINGTON — U.S. intelligence agencies have evidence that Russia is firing artillery at Ukrainian military positions from inside Russian territory, a State Department spokeswoman said Thursday.
Russia has boosted its support for Ukrainian separatists since a Malaysia Airlines jetliner was shot down by a surface-to-air missile July 17 over territory controlled by the separatists, U.S. officials said, including sending additional rocket launchers into the conflict zone.
“We have new evidence that the Russians intend to deliver heavier and more powerful multiple-rocket launchers to the separatist forces in Ukraine and have evidence that Russia is firing artillery from within Russia to attack Ukrainian military positions,” State Department spokeswoman Marie Harf said.
Some of the information, Harf said, is based on “human intelligence,” meaning information supplied by sources on the ground rather than intercepted communications or images from satellites.
When two Ukrainian fighter jets were shot down Wednesday, Ukrainian officials said they had been hit by missiles fired from inside Russia. U.S. intelligence analysts have not been able to determine how the jets were downed.
But fire from Russian soil would mark an escalation of Russian President Vladimir Putin’s support for the separatist forces. Putin has refused to back down despite increased sanctions against Russian officials and threats of more to come. Russia has played down its military support for the separatists.
The Organization for Security and Cooperation in Europe has agreed to send teams of observers to two posts on the 1,200-mile Russia-Ukraine border. Russia, which sits on the OSCE’s permanent council, refused to give observers access to other parts of the border.
“I find it deeply disappointing that Russia was only willing to accept international observers at two small checkpoints on its border with Ukraine,” Daniel Baer, the U.S. ambassador to the OSCE, said in a statement.
“This will not provide any real accounting of Russia’s massive flow of illegal arms, funding and personnel,” Baer said.
A Russian military base near the city of Rostov-on-Don, about 100 miles east of the Ukrainian border, has been a staging area for multiple-rocket launchers, such as the truck-mounted system that U.S. officials believe fired an SA-11 radar-guided missile at the Malaysian airliner, said a senior Obama administration official. The official spoke on the condition of anonymity to discuss internal assessments.
In the days after the airliner crashed, U.S. intelligence agencies determined that the Russian military sent a column of more than 100 vehicles into eastern Ukraine, including tanks, artillery and multiple-launch rocket systems, Army Col. Steve Warren, a Pentagon spokesman, told reporters Wednesday.
Posted by Steve Douglass at 8:40 AM No comments: 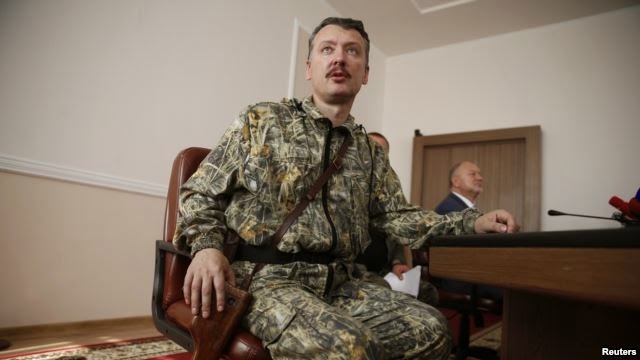 In a post on his VKontakte page, Russia's largest social media site, separatist leader Igor Girkin, aka Strelkov, wrote:  "In the vicinity of Torez, we just downed a plane, an AN-26. It is lying somewhere in the Progress Mine. We have issued warnings not to fly in our airspace. We have video confirming. The bird fell on a waste heap. Residential areas were not hit. Civilians were not injured."
The AN-26 is a Soviet-built twin-engine transport plane used by the Ukrainian military. Torez is a small city of 80,000 located some 40 kilometers east of Donetsk.  Included in the post were two videos that showed a rising plume of black smoke in the distance.
The claim was posted at 5:50 pm Moscow time, shortly before reports surfaced that the Malaysian civilian aircraft, on a flight from Amsterdam to Kuala Lumpur, had crashed in eastern Ukraine in the same area near the Russian border.
A Ukrainian Interior Ministry adviser, Anton Herashchenko, claimed the plane had been shot down by a ground-to-air missile.
Andrei Purgin, the self-styled first vice premier of the unrecognized Donetsk People's Republic, told Interfax the separatists do not have weapons that could shoot down a plane flying at an altitude of 10,000 meters.
Both Ukrainian and Russian authorities have denied shooting down the Malaysian passenger aircraft.
Posted by Steve Douglass at 10:05 AM 1 comment: 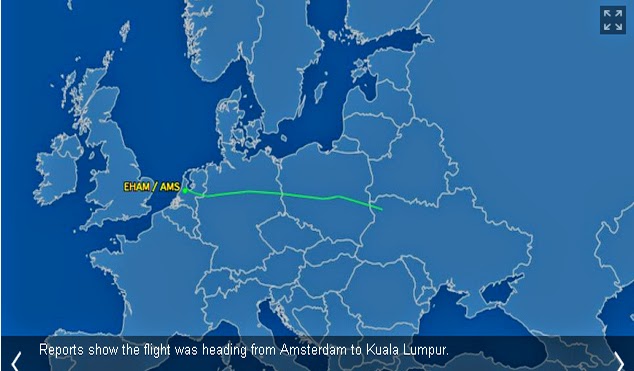 Posted by Steve Douglass at 9:21 AM No comments:

(Reuters) - The United States said on Wednesday it would increase security at overseas airports with direct flights into the country and U.S. officials cited concerns al Qaeda operatives in Syria and Yemen were developing bombs that could be smuggled onto planes.

European airports would be taking the extra precautions, the U.S. officials told Reuters on condition of anonymity.

The Department of Homeland Security said "enhanced security measures" would be implemented in the next few days at "certain overseas airports with direct flights into the United States."

It did not specify which airports or what countries would be affected, nor did it say what triggered the extra precautions.

"We are sharing recent and relevant information with our foreign allies and are consulting the aviation industry," DHS Secretary Jeh Johnson said in a statement.

Earlier, law enforcement and security officials told Reuters the United States and European authorities were discussing measures that could include extra scrutiny of U.S.-bound passengers' electronics and footwear, and installation of additional bomb-detection machines.

Bombmakers from the Nusra Front, al Qaeda's affiliate in Syria, and Yemen-based Al Qaeda in the Arabian Peninsula, or AQAP, are believed to be working together to try to develop explosives that could avoid detection by current airport screening systems, U.S. national security sources said.

The main concern is that militant groups could try to blow up U.S.- or Europe-bound planes by concealing bombs on foreign fighters carrying Western passports who spent time with Islamist rebel factions in the region, the sources said.

AQAP has a track record of plotting such attacks. It was behind a 2009 attempt by a militant with a bomb hidden in his underwear to blow up a Detroit-bound airliner.

U.S. officials believe Nusra and AQAP operatives have carried out operational testing of new bomb designs in Syria, where Nusra is one of the main Islamist groups fighting to overthrow President Bashar al-Assad, a national security source said.

The "stealth" explosives the bombmakers are trying to design include non-metallic bombs, ABC News reported.

READ THE OF THE STORY REST HERE
Posted by Steve Douglass at 2:42 PM 1 comment: