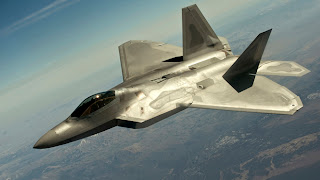 An F-22 fighter jet used in a flyover during a remembrance ceremony at Pearl Harbor scraped its tail on a runway as it landed, causing $1.8 million in damage.

A Hawaii National Guard spokesman says nobody was hurt in the incident Friday morning on the 71st anniversary of the Japanese attack on Pearl Harbor.

Lt. Col. Charles Anthony says the jet was coming back to Joint Base Pearl Harbor-Hickam from a training exercise after taking part in the ceremony. He says the "mishap" happened roughly 90 minutes after the flyover.

In jet terms, the damage to the F-22's horizontal stabilizers may be little more than a pricey fender-bender.

Anthony says it costs roughly $147 million to make one F-22 fighter. nThe Raptor belonged to the 199th and 19th Fighters Squadrons. It sustained damage to both horizontal stabilizers.

The initial cost estimate for repairs is $1.8 million. Each Raptor costs more than $400 million.  The tail of the plane scraped the runway during landing, according to a Hawaii National Guard spokesman.

The pilot of the aircraft was uninjured. The cause of the damage is under investigation.