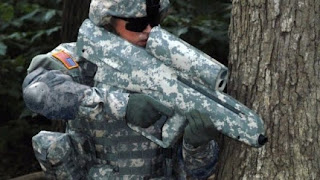 The XM25 Individual Air Burst Weapon is looking likely to be the shoulder-fired weapon of choice for the US military to kill or neutralize hidden targets. Due for field test this summer, the lightweight XM-25 "smart weapon" uses High Explosive Air-Burst (HEAB) munitions that can be programmed to detonate at a precise point in the air without the need to impact, spelling trouble for elusive targets, be they behind a wall, inside a building or in a foxhole.

Developed jointly by the German arms manufacturer Heckler & Koch and the US company Alliant Techsystems (ATK Corporation), the XM-25 is a semi-automatic, shoulder-fired weapon with a five-round magazine and weighs in at around 14 pounds (6.3kg) – about the same weight as an M-16 with a 203 grenade launcher. The weapon's XM116 integral fire system provides the weapon with its precision and is capable of controlling individually each of the 25mm rounds in real time.

Based on a thermal optic, day-sight, laser range finder, compass and infrared light, the system can precisely measure the distance to the target and program each round to explode close to the mark via the wireless connection. Capable of hitting a point target at 500 meters and area targets at 700 meters with a range of munitions including HEAB, anti-personnel, two types of non-lethal munitions – blunt and agent dispersing airburst - plus armor piercing, and door breaching munitions, this is one very nasty piece of ordinance and a must have on any soldiers list.

In a nutshell, it operates with the soldier sighting the target and the advanced laser rangefinder transmitting range information to the chambered 25mm round. The soldier then essentially points and fires. After the round leaves the chamber and moves towards its target, the system precisely measures the distance traveled and detonates it at exactly the right moment to deliver maximum effectiveness. ATK says that the XM25 increases the warfighter’s probability of hit-to-kill performance by up to 500 percent over existing weapons and extends the effective range of the soldier’s individual weapon to more than 500 meters.

The explosives were carried in a soft plastic container - possibly a condom - though much of the packaging was destroyed in the fire, the official said.

The FBI is questioning the suspect, identified as 23-year-old Nigerian Umar Farouk Abdulmutallab, who claimed to be acting on orders from al Qaeda to blow up the airliner, officials said.

A high-ranking law enforcement official told CBS News that the suspect apparently used a syringe to inject a chemical into the powder, which was located near his groin. It is a technique not seen in previous attempted attacks and it's possible that this incident was a test of whether the materials could pass screening and how effective they might be at causing damage, the source said.

According to Encyclopedia Brittanica, PETN is a highly explosive, colorless organic compound, and is related to nitroglycerin. Introduced as an explosive after World War I, PETN is "valued for its shattering force and efficiency ... and is the least stable of the common military explosives but retains its properties in storage for longer periods than nitroglycerin or cellulose nitrate (nitrocellulose) does."

PETN is also used in heart medication as a stimulant.

(CNN) -- Syed Jafry was preparing for his plane to land in Detroit, Michigan, after a long flight from Amsterdam, Netherlands, when he heard a noise that startled him.
"There was a little bit of light, a little bit of -- kind of flamish light and there was fire," Jafry told CNN. "And people began to panic."
For a couple of seconds on Northwest Flight 253, nobody knew what was going on, he said.

That pop, officials say, came from a Nigerian man who ignited a small explosive device as the flight descended into the Detroit, Michigan, area. The White House described the incident as an attempted terrorist attack. The suspect was eventually subdued by passengers and crew.

As the commotion began, passengers didn't know what to think.
Jafry said he thought the man looked to be in his 20s.
Video: Passenger saw smoke on plane Video: Suspect discussed

Passenger Elias Fawaz told WDIV that the detonation sounded "like a balloon being popped" and said he could smell smoke.
That's when he saw a struggle in the cabin.

A man, sitting three or four rows behind Jafry jumped over a group of seats, tackled the suspect and put him in a headlock.

"He handled him pretty good, I think," Jafry said.
Jafry said other passengers and crew members then helped subdue the man and put out flames after the suspect's pants appeared to catch fire.
People screamed.

"Everybody was rushing towards that area and tried to get water," Jafry said, adding that people rushed the man with blankets and a fire extinguisher.

"They put out the fire, brought him up front where they stripped him down to make sure that he had nothing else," passenger Melinda Dennis told CNN affiliate WDIV.
Other passengers told WXYZ the injured suspect was put in the first row of first class.

"He appeared to be more stunned and surprised with the whole act," Jafry said of the suspect after he was subdued.

Passengers, including Jafry, said they could see the suspect was burned on different parts of his body, but he didn't seem to say much or act as if he were in pain.

Jafry said soon after the suspect was moved to the front of the plane, the crew and pilot told passengers the incident was under control.

"And we were on the ground, I think between 10 to 20 minutes after the incident," Jafry said.

Jafry and other passengers were screened again and questioned for about four to five hours before finally being able to meet their friends and family, or reach connecting flights
Posted by Steve Douglass at 12:18 PM No comments:

Romulus, Michigan (CNN) -- The 23-year-old man suspected of trying to bring down a Northwest Airlines jet that landed in Detroit, Michigan, is the son of a man who recently stepped down as chairman of a bank in Nigeria, a family source told CNN.

Umar Farouk Abdulmutallab is the son of former First Bank PLC chairman Alhaji Umar Mutallab, according to the relative in Kaduna, in northern Nigeria.

Abdulmutallab suffered burns when he ignited a small explosive device aboard the plane; he was hospitalized in Michigan for his burns. His plans were foiled by crew members and passengers.

The family source told CNN that Abdulmutallab received a college degree in London, England, where he lived for three years.

A spokesman at the University College of London told CNN on Saturday that a student by the name of Umar Farouk Abdul Mutallab was enrolled in the department of mechanical engineering from September 2005 to June 2008. Dave Weston said the college could not confirm whether the former student and Abdulmutallab are the same person.

The last time Abdulmutallab's family heard from him was two months ago, when they received a text message, the family source said. Abdulmutallab told the family earlier that he had gone to Yemen.

Abdulmutallab went through "normal security procedures" in Amsterdam, and those were "well-performed," the Netherlands' national coordinator for counterterrorism told CNN.

Witnesses said they heard a loud pop or bang and saw something burning in Abdulmutallab's lap.

Schuringa said he saw that Abdulmutallab was holding a burning object between his legs.

See other passengers' accounts"I pulled the object from him and tried to extinguish the fire with my hands and threw it away," said Schuringa, who suffered minor burns on his hands.
Abdulmutallab, who is from Nigeria, was taken into custody and hospitalized with second- and third-degree burns on his thighs, according to federal law enforcement and airline security sources. The suspect was "talking a lot" to the FBI, said a senior U.S. official.

Another person was taken to the University of Michigan Medical Center in Ann Arbor, about 25 miles away, hospital spokeswoman Tracy Justice said.

The remains of the device were sent to an FBI explosives lab in Quantico, Virginia, for analysis, security sources said.

No other suspicious materials were found on the plane or in luggage, the law enforcement and airline security sources said. The suspect had only carry-on luggage.

The plane, an Airbus 330 with Delta Air Lines markings, landed shortly before noon. It was carrying 278 passengers. Delta is the parent company of Northwest.

The sources told CNN that the suspect flew into Schiphol Airport in Amsterdam on a KLM flight from Lagos, Nigeria, and is not believed to be on any "no fly" list, although his name does appear in a U.S. database of people with suspect connections. He did not undergo secondary security screening in Amsterdam, an administration official said.

The initial impression is that the suspect was acting alone and did not have any formal connections to organized terroristgroups, including al Qaeda, said an official who is familiar with the investigation.

Abdulmutallab, however, claimed to have extremist ties and said the explosive device "was acquired in Yemen along with instructions as to when it should be used," a federal security bulletin obtained by CNN said.

President Obama, who is spending the holidays in Hawaii, was briefed on the incident and directed "that all appropriate measures be taken to increase security for air travel," said White House spokesman Bill Burton. Obama made no changes to his schedule, Burton said.

An official with the U.S. Transportation Security Administration told CNN there will be increased security at airports, and screening likely will take longer. No details were provided on all the steps being taken.

The official advised travelers to allow for extra time before their flights. There will be no changes in screening requirements, and no change in the number of carry-on bags allowed.

A note was released earlier this week by the Office of Intelligence and Analysis that said FBI officials "currently have no specific, credible intelligence indicating plans by al Qaeda or other terrorist groups to conduct attacks in the United States during the 2009 holiday season."

Home Secretary Alan Johnson said he is following developments closely and has assured the public that police in Britain are working closely with U.S. investigators "to uncover the full background to the incident."

Posted by Steve Douglass at 12:10 PM No comments: