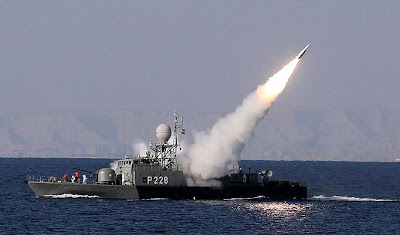 Tehran, Iran (CNN) -- Iran test-fired a long-range, shore-to-sea missile on Monday, the final day of its naval exercises in the Strait of Hormuz, state-run media reported.

"A large number of the long-range surface-to-sea Ghader missiles have already been delivered to the Iranian Armed Forces," IRNA said.

A short-range Nasr missile would also be test-fired, along with a surface-to-surface Noor missile, the news agency said.

The Noor is an "advanced radar-evading, target-seeking, guided and controlled missile and can easily find its target and destroy it," IRNA reported, quoting 2nd Adm. Seyed Mahmoud Musavi.
Iran began the exercises in the Persian Gulf and the Sea of Oman on December 24, IRNA said. Western diplomats have described the maneuvers as further evidence of Iran's volatile behavior.
Iran also successfully test-fired a medium-range, surface-to-air and radar-evading Mehrab missile on Sunday, according to the semi-official Fars news agency. A submarine also successfully fired torpedoes at mock vessels, according to the report.

Fars added that plans for Monday involve "a new tactic which is designed to prevent any movement in the Strait of Hormuz if the Iranian navy so desires."

The naval exercises focused attention on the strait -- a shipping channel leading in and out of the Persian Gulf between Iran on one coast and Oman and the United Arab Emirates on the other. It is strategically important because tankers carrying oil travel through it -- some 15 million barrels daily in 2009, according to the U.S. Energy Information Administration.
Posted by Steve Douglass at 5:02 AM No comments: