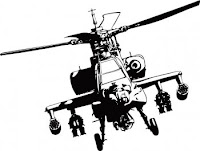 A U.S. helicopter exchanged fire with Pakistani troops near the border between Afghanistan and Pakistan today, resulting in injuries for two Pakistani soldiers, U.S. and Pakistani officials said.

Accounts differ as to what exactly prompted the firefight, but the incident may further strain already fragile relations between the U.S. and Pakistan following the American unilateral military raid deep in Pakistani territory that killed Osama bin Laden May 1.

The U.S.-led International Security Assistance Force said U.S. helicopters were in Afghanistan near Forward Operating Base Tillman when they responded to incoming direct and indirect fire from over the border in Pakistan, presumably from militants. The helicopters initially did not return fire, but when a second round of incoming fire began, they did fire in response.

The Pakistani military, however, said that two NATO helicopters caused the incident by violating Pakistani airspace before being fired upon by Pakistani troops.

"We know for sure the [Apache] helicopter was fired upon -- we got rounds inside the helicopter," Campbell said. "The helicopter returned fire and we are working through just exactly what happened... If [American soldiers] are taking effective fire, then by all means they have to take all measures to safeguard themselves and the other people around there."
Posted by Steve Douglass at 2:23 PM No comments: 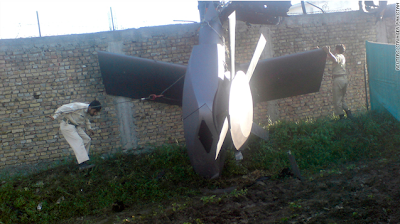 Islamabad, Pakistan (CNN) -- Pakistan will return the tail of a U.S. helicopter Tuesday that was damaged during the raid that killed terror leader Osama bin Laden, a move that is part of a process to improve cooperation between the two nations, Sen. John Kerry said.

The helicopter crashed during the raid on the al Qaeda leader's compound May 2.
"I can tell you, an example, tomorrow the tail of the helicopter will be returned to America and we'll take possession of that in a coordinated operation that will take place with them," Kerry, D- Massachusetts, told reporters Monday during a visit to Islamabad. "That's step number one. And there are other steps that will take place immediately.

The one major problem for the Navy SEALs who killed bin Laden was the crash of the helicopter.
In photos of what was left after the SEAL team tried to destroy the aircraft, numerous aviation experts say they saw several telltale signs of stealth technology.
"Had this particular helicopter not crashed, we still would have no idea of its existence," said Gareth Jennings, the aviation desk editor for Jane's Defence Weekly.


The helicopter was left on the ground at the al Qaeda leader's compound during the raid, although the SEALs were able to destroy much of the main body when it became clear it couldn't fly.
But the tail rotor assembly came down on the other side of the compound wall and was left largely intact when the SEALs finished their mission.
Pakistani troops were seen hauling the wreckage away on trucks covered with tarps.
Posted by Steve Douglass at 5:57 AM No comments: