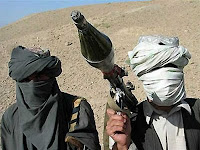 Peshawar, Jan.16 (ANI): While the Pakistani security forces are still ascertaining reports about the death of the Tehrik-e-Taliban Pakistan (TTP) leader Hakimullah Mehsud in a US drone strike, the TTP has released an audio tape of Mehsud claiming that their leader is safe.

It may be noted that 15 militants were reportedly killed in a US missile hit in the tribal controlled region between North and South Waziristan on Thursday. Security officials said Mehsud too may have been killed in the attack, but they have failed to substantiate the report.

The Pakistan government and the Army have clarified that they are uncertain over the TTP's top commander's death.

Mehsud, in his audio message, claimed that he is unhurt, and that it is a conspiracy of the government to flash the news about his death.

"Sometimes they (the government) launch propaganda about my martyrdom through media and sometimes they say that the operation has been completed in South Waziristan. This can never happen," The Nation quoted Mehsud, as saying.

However, there was no mention of the day or date of the drone strike in which Mehsud is said to have been killed, which raises questions over whether the message was recorded after the said strike.

Meanwhile, the BBC quoted a Taliban leader, as saying that Mehsud has been injured in Thursday's attack. (ANI)

Posted by Steve Douglass at 6:38 AM No comments: