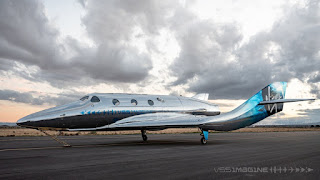 Virgin Galactic, the space tourism firm that hopes to send its first customers to space next year, unveiled a new spacecraft design on Tuesday. The sleek new space plane has a reflective coating that the company calls "mirror-like," and says will add to space tourists' experience.

light tests of the new vehicle are expected to begin this summer, the company said in a press release.
Visually, the SpaceShip III closely resembles SpaceShipTwo, the vehicle that Virgin Galactic (SPCE) has been testing for more than a decade. But the updated space plane is designed to be more easily manufactured, and to be durable enough to help the company achieve its goal of flying 400 trips to suborbital space each year.
The company is, however, also still continuing to test its SpaceShipTwo vehicle, called VSS Unity. The next trial run for it is slated for May, and it will follow up two prior test flights that were successful and one that was prematurely scrapped in December.
December's planned test flight was halted when VSS Unity's onboard rocket motor computer lost connection, the company said. And last month the Washington Post, citing an upcoming book from New Yorker staff writer Nicholas Schmidle, revealed that in Virgin Galactic encountered a potentially serious safety hazard during a test flight in 2019. A safety probe was ordered to investigate why a seal on its space plane's wing had come undone, risking loss of the vehicle and the lives of the three crew members on board, according to the Post. No one was harmed in the test flight, which was publicly deemed a success.
Virgin Galactic moved into the New Mexico facility in May 2019. The company refurbished the building to include a lounge and other amenities that ticket holders — who so far have forked over between $200,000 to $250,000 each to reserve seats — will be able to use before their brief journey to the edge of space.
Posted by Steve Douglass at 10:15 AM No comments: