Baumgartner skydive from 96,000 feet a success 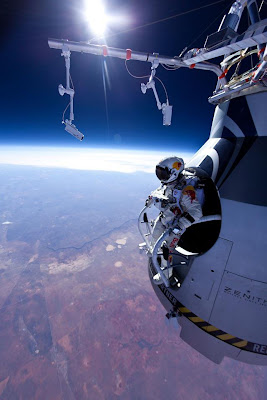 Next stop: the edge of space.

Daredevil adventurer Felix Baumgartner has successfully jumped from from 96,640 feet (29,455 meters)  from a custom balloon -- the last test required before his planned 23-mile freefall from the edge of space can take place.
On that jump, Baumgarther will achieve supersonic speeds.
The test jump, completed Wednesday morning over Roswell, N.M., involved 3:48 minutes of free fall leading up to a 10 minute and 36 seconds decent. A spokesman for the Red Bull Stratos event, as the jump has been branded, could not provide additional details on the 17-mile leap.

"It felt completely different at 90,000 feet," Baumgartner told the AP. "There is no control when you exit the capsule. There is no way to get stable."

Baumgartner's test jump had been tentatively set for Mon., July 23, following a review of nine years of local weather data. But two days of storm clouds led to the two-day delay.

In compliance with U.S. Federal Aviation Administration regulations, the Red Bull Stratos team could not launch the balloon if skies were half overcast or if the horizontal visibility was less than 3 miles.

'One mile every 5 seconds -- this is how fast you travel at supersonic speed.'

The final jump -- an attempt to break the record of 102,800 feet for the highest altitude freefall set in 1960 -- will take place "shortly after the completion of the final manned test jump," the team said.

On that leap, Baumgartner's custom-spacesuit-wrapped body will travel faster than the speed of sound.
“One mile every 5 seconds -- this is how fast you travel at supersonic speed,” Baumgartner had explained earlier, somewhat astonished himself at that particular measurement of how quickly he will be falling from the heavens.
“It’s hard to believe it, if you put it that way, but I love it,” added the 43-year-old adventurer, who is looking forward to the historic jump that will also collect important data for the advancement of medical science. “Will I break the sound barrier this summer? We think it’s possible, and I’m putting everything into making it happen.”

With air temperatures of -70 degrees Fahrenheit, his very blood would boil if exposed to the air. To do it at all requires a custom supersonic spacesuit, designed by the David Clark Co., which made the first such pressurized suits to protect World War II fighters during high-speed maneuvers.
Read more: http://www.foxnews.com/scitech/2012/07/25/daredevil-felix-baumgartner-survives-17-mile-plunge/#ixzz21g1RLPJY
Posted by Steve Douglass at 3:46 PM No comments: