ISR blimp would fly for 10 years uninterrupted: "A blimp that hovers at 65,000 feet and stays aloft for a decade is what the Air Force hopes within five years will revolutionize its intelligence gathering."

Posted by Steve Douglass at 8:15 PM No comments:

Gates: United States Can Do Nothing to Stop Missile Launch 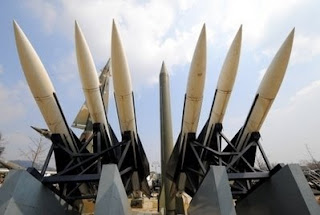 The United States can do nothing to stop North Korea from breaking international law in the next 10 days by firing a missile that is unlikely to be shot down by the U.S. or its allies, Defense Secretary Robert Gates said Sunday.

Appearing on "FOX News Sunday," Gates said North Korea "probably will" fire the missile, prompting host Chris Wallace to ask: "And there's nothing we can do about it?"

"No," Gates answered, adding, "I would say we're not prepared to do anything about it."

Last week, Admiral Timothy Keating, commander of U.S. forces in the Pacific, said the U.S. is "fully prepared" to shoot down the missile. But Gates said such a response is unlikely.

North Korea has moved a missile onto a launch pad and says it will be fired by April 8. Pyonyang insists the missile is designed for carrying a communications satellite, not a nuclear warhead that the secretive nation appears bent on developing.

Gates said while he doesn't think North Korea has the capability yet to shoot off a long-range nuclear-tipped missile, "I don't know anyone at a senior level in the American government who does not believe this technology is intended as a mask for the development of an intercontinental ballistic missile."


Editors note: This is exactly what I expected Defense Secretary Robert Gates to say, trying to convince the North Koreans we do not have the capability to shoot down their rocket, when indeed we do.

The technology is still experimental and Top Secret.
if deployed and it destroys the Korean rocket (should it look like it threatens Japan or Alaska) the United States will NOT take credit for the shoot down for two reasons.

A. It's better for the world to think the North Korean military is incompetent and impotent.

B. Russia is watching and if the American missile technology is revealed to be as good as they fear, talks for deploying the NMD system in Europe will break down.