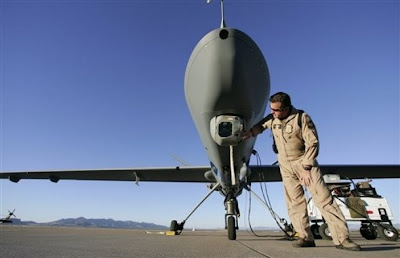 By Karin Brulliard and Haq Nawaz Khan
Sunday, Sep 18, 2011
ISLAMABAD, Pakistan — Pakistani troops battled Taliban militants Sunday morning to win control of the remnants of a CIA drone that crashed in the nation’s borderlands, according to Pakistani security officials.

The cause of the crash of the unmanned Predator aircraft, among the drones the CIA uses to fire missiles at Taliban and al-Qaeda hideouts in the rocky region bordering Afghanistan, remained in dispute hours after it was downed in Zangarha village in South Waziristan. A military intelligence official based in the nearest city, Wana, said the drone suffered a mechanical failure. The Pakistani Taliban, a domestic offshoot of the Afghan insurgent organization, said its fighters had shot down the aircraft.

Pakistan’s restive tribal belt is a no-go zone for journalists and outsiders, making it impossible to verify the accounts of the crash. U.S. officials do not publicly acknowledge or discuss the covert drone program, and the CIA declined to comment Sunday on the crash reports. The Pakistani security officials spoke on the condition of anonymity because they were not authorized to discuss the matter publicly.

But if the reports prove true, the crash would be among very few in the seven-year-long history of the drone campaign in Pakistan, and it could risk exposing extremely sensitive technology, including cameras and other sensors used to monitor insurgents. Although the Taliban might have little tactical use for the debris, some of Pakistan’s allies — including Iran and China — might be interested in it.

In May, a U.S. helicopter crashed during the American commando raid that killed terrorist leader Osama bin Laden in the northwestern Pakistani city of Abbottabad, and U.S. officials later said they suspected, but had not confirmed, that Pakistan gave the Chinese access to the largely destroyed helicopter. Pakistani officials denied doing so.

John Pike, a weapons expert at Globalsecurity.org, said that the drone crash Sunday could have exposed sensitive systems but that it would be difficult for adversaries to use the wreckage to replicate technology or adopt surveillance countermeasures. While the Chinese, for example, have sought to develop drone platforms and might gain insight from the downed U.S. aircraft, they already have a general understanding of drone capabilities. The downed copter, by contrast, used previously undisclosed stealth technologies.

“I don’t think the Chinese can do much more with it than the Taliban,” Pike said.

Drone strikes, which have skyrocketed during the Obama administration, are a growing source of tension between the United States and Pakistan, long-wary allies whose relationship has worsened this year. For years, the Pakistani government has allowed the program to continue while publicly protesting it and asking the United States to share its drone technology. But the Pakistani government’s tacit support for the drone campaign has waned as public outrage over it rises.

According to two Pakistani security officials, the drone crashed Sunday near a military base and Taliban militants quickly attempted to seize the debris. But the officials said Pakistani troops confronted the fighters and were able to collect the drone remnants after a clash lasting nearly four hours. Three militants were killed and two soldiers were injured in the fighting, an official from the paramilitary Frontier Corps said.

A Pakistani Taliban spokesman who identified himself as Saifullah Sayab said in a phone interview that 25 fighters used an antiaircraft gun to shoot down the drone. The Pakistani army deployed a gunship helicopter to repel the Taliban, he said.

Khan is a special correspondent. Staff writer Greg Miller in Washington contributed to this report.
Posted by Steve Douglass at 8:03 PM No comments: