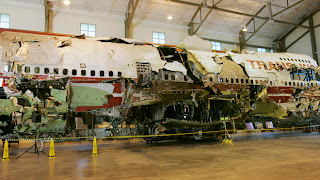 A group of whistleblowers, including a number of aviation experts, have come forward in a new documentary to claim that the official explanation for the crash of TWA Flight 800 was wrong and a gas tank explosion did not bring down the flight off the coast of Long Island 17 years ago.

However, the six whistleblowers, all part of the original investigation team, stopped short of saying the plane was shot down.

Flight 800, a Boeing 747, had just taken off from JFK airport with 230 people aboard on July 17, 1996 enroute to Paris when it exploded and crashed off the coast of nearby East Moriches, Long Island, killing everyone on the plane.

“..This team of investigators who actually handled the wreckage and victims’ bodies, prove that the officially proposed fuel-air explosion did not cause the crash,” reads a statement by the producers of the film, which will debut on cable network EPIX next month. “They also provide radar and forensic evidence proving that one or more ordinance explosions outside the aircraft caused the crash.” However, the statement said they did not speculate about the source or sources of any ordinance explosions.

The whistleblower team, which includes investigators-at the time-from the National Transportation Safety Board (NTSB), TWA, and the Airline Pilots Association, have since retired from their positions. They claim that at the time, they were placed under a gag order by the NTSB, which they charged falsified the official conclusion of the cause of the crash. They indicated they would elaborate more in a Wednesday media briefing.

The NTSB report, the culmination of a four-year investigation, suggested the cause of the explosion was due to an explosion in the gas tank caused by a short circuit.

The National Security Agency and the FBI are tapping directly into the central servers of nine leading U.S. Internet companies, extracting audio and video chats, photographs, e-mails, documents, and connection logs that enable analysts to track foreign targets, according to a top-secret document obtained by The Washington Post.

The program, code-named PRISM, has not been made public until now. It may be the first of its kind.


The NSA prides itself on stealing secrets and breaking codes, and it is accustomed to corporate partnerships that help it divert data traffic or sidestep barriers. But there has never been a Google or Facebook before, and it is unlikely that there are richer troves of valuable intelligence than the ones in Silicon Valley.Equally unusual is the way the NSA extracts what it wants, according to the document: “Collection directly from the servers of these U.S. Service Providers: Microsoft, Yahoo, Google, Facebook, PalTalk, AOL, Skype, YouTube, Apple.”

London’s Guardian newspaper reported Friday that GCHQ, Britain’s equivalent of the NSA, also has been secretly gathering intelligence from the same internet companies through an operation set up by the NSA.

According to documents obtained by The Guardian, PRISM would appear to allow GCHQ to circumvent the formal legal process required in Britain to seek personal material such as emails, photos and videos from an internet company based outside of the country.

PRISM was launched from the ashes of President George W. Bush’s secret program of warrantless domestic surveillance in 2007, after news media disclosures, lawsuits and the Foreign Intelligence Surveillance Court forced the president to look for new authority.

Congress obliged with the Protect America Act in 2007 and the FISA Amendments Act of 2008, which immunized private companies that cooperated voluntarily with U.S. intelligence collection. PRISM recruited its first partner, Microsoft, and began six years of rapidly growing data collection beneath the surface of a roiling national debate on surveillance and privacy. Late last year, when critics in Congress sought changes in the FISA Amendments Act, the only lawmakers who knew about PRISM were bound by oaths of office to hold their tongues.

The court-approved program is focused on foreign communications traffic, which often flows through U.S. servers even when sent from one overseas location to another. Between 2004 and 2007, Bush administration lawyers persuaded federal FISA judges to issue surveillance orders in a fundamentally new form. Until then the government had to show probable cause that a particular “target” and “facility” were both connected to terrorism or espionage.

In four new orders, which remain classified, the court defined massive data sets as “facilities” and agreed to certify periodically that the government had reasonable procedures in place to minimize collection of “U.S. persons” data without a warrant.

In a statement issue late Thursday, Director of National Intelligence James R. Clapper said “information collected under this program is among the most important and valuable foreign intelligence information we collect, and is used to protect our nation from a wide variety of threats. The unauthorized disclosure of information about this important and entirely legal program is reprehensible and risks important protections for the security of Americans.”

READ THE REST OF THE STORY HERE
Posted by Steve Douglass at 2:35 PM No comments: