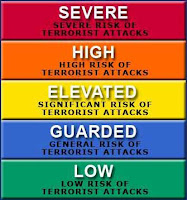 Britain’s intelligence services raised the threat level of a terrorist attack from “substantial” to “severe” on Friday. The rating, the fourth highest of five levels, means an attack is considered to be highly likely. Home Secretary Alan Johnson said there was no intelligence to suggest that an attack was imminent. “All I would say to the public is we need to be vigilant,” he said.
Posted by Steve Douglass at 6:56 PM No comments:

Officials: U.S. To Give Unarmed Drones To Pakistan

ISLAMABAD - The United States plans to provide Pakistan with a dozen unarmed drone aircraft that will help bolster its military as it takes on Taliban militants, U.S. defense officials said.

Details of the drones emerged late Jan. 21 during a visit to Pakistan by U.S. Defense Secretary Robert Gates, who was asked in an interview with Pakistani television if Washington would supply Islamabad with the unmanned aircraft. "There are some tactical UAVs that we are considering, yes," Gates said.

Defense officials in his delegation afterward confirmed funds had been set aside to secure 12 Shadow aerial drones for Pakistan.

The Shadow drones, smaller than the armed Predator and Reaper aircraft, are about 11 feet long and have a wing-span of 14 feet, with sensors and cameras feeding video images back to operators on the ground.

The Pakistani military already had some less sophisticated drones for surveillance but would need to heavily invest in training specialists to be able to take advantage of the new hardware, said U.S. officials, who spoke on condition of anonymity.

The U.S. employs armed drones for missile strikes against al-Qaida and Taliban figures in Pakistan, fueling anti-American sentiment and drawing public condemnation from the government in Islamabad.

Pakistani officials have previously called for Washington to provide its military with armed drones.

Posted by Steve Douglass at 6:50 PM No comments:

Second man was tracked on Detroit flight: "U.S. authorities had another Nigerian-born man with an engineering background on their radar when Northwest Airlines Flight 253 prepared to land in Detroit, Michigan, on Christmas Day.

Posted by Steve Douglass at 1:46 PM No comments:

RQ-170 Has Links to Intelligence Loss to China

RQ-170 Has Links to Intelligence Loss to China: "The same week, Air Force officials revealed that a stealthy, all-jet RQ-170 remotely piloted aircraft had flown in Afghanistan, and its top intelligence officer said his number one priority was a larger, longer-range strike-reconnaissance aircraft.

Both events have their origins in experimental and prototype unmanned aircraft developed as a result of the internment of a U.S. Navy EP-3E electronic surveillance aircraft on April Fool's Day in 2001 and the compromise of the intelligence information on board.

The RQ-170 design has linkages to earlier programs at Lockheed Martin’s Advanced Development Programs including the stealthy DarkStar and Polecat UAVs. It is a tailless flying wing whose upper surfaces have conformal sensor and/or communications pods faired into each side outboard of a capacious centerline fuselage.

‘Dark Star didnt die when Lockheed Martin [retired the airframe for being too small and short-ranged],’ said a now-retired company executive last week. ‘It just got classified.’

These recent revelations also reflect the battle to balance how the military wants to fight now in Afghanistan against how it wants to fight elsewhere in the future. Part of the test will come in the next 18 months as about 150,000 U.S. and allied troops will try to break the offensive capabilities of the Taliban and al Qaeda in Afghanistan and new technologies will be brought into play. The rest will involve the Air Force’s investment in advanced technologies.

‘We cannot move into a future without a platform that allows [us] to project power long distances and to meet advanced threats in a fashion that gives us an advantage that no other nation has,’ says Lt. Gen. Dave Deptula, deputy chief of staff for intelligence, surveillance and reconnaissance. ‘We can’t walk away from that capability.’

For example, surveillance aircraft can see a lot more, farther and better with technologies like long wave infrared if the platform can operate at 50,000 ft. or higher. In comparison, the RC-135S Cobra Ball, RC-135W Rivet Joint and E-8C Joint Stars manned surveillance aircraft are all limited to an altitude of less than 30,000 ft. – sometimes well under. Additionally, the multi-spectral technology to examine the chemical content of rocket plumes has been miniaturized to fit easily on a much smaller, unmanned aircraft. Other sensors of interest are electronically scanned array radars, low-probability of intercept synthetic aperture radars and signals intelligence.

Follow the landing of a damaged Navy EP-3E in China, in early 2001 Defense Secretary Donald Rumsfeld called a classified, all-day session of those with responsibilities for ‘Sensitive Reconnaissance Operations.’ (AW&ST, June 4, 2001, p. 30) They discussed how to avoid future embarrassing and damaging losses of classified equipment, documents or aircrews without losing the ability to monitor the military forces and capabilities of important countries like China. Their leading option was to start a new, stealthy, unmanned reconnaissance program that would field 12-24 aircraft. Air Combat Command, then led by Gen. John Jumper, wanted a very low-observable, high-altitude UAV that could penetrate air defense, fly 1,000 nau. mi. to a target, loiter for 8 hr. and return to base.

During the invasion of Iraq in 2003, a UAV described as a derivative of DarkStar was being prepared and was said by several officials to have been used operationally in prototype form. (AW&ST, July 7, 2003, p.20 and March 15, 2004, p.35) ‘It’s the same concept as DarkStar, it’s stealthy, and it uses the same apertures and data links,’ said an Air Force official at the time. ‘Only it’s bigger,’ said a Navy official. ‘It’s still far from a production aircraft, but the Air Force wanted to go ahead and get it out there.’ The classified UAV’s operation caused consternation among U-2 pilots who noticed high-flying aircraft operating within several miles of their routes over Iraq. Flights of the mysterious aircraft were not coordinated with those of other manned and unmanned surveillance units.

There is great interest in how the U.S. now leverages its black- and white-world UAVs and RPAs to maintain a watch over the vast and rugged areas of Afghanistan with a relatively small NATO force. The revitalized conflict in Afghanistan will be largely a ground war with airpower serving as flying artillery, rapid off-road transport and as a wide-ranging reconnaissance force.
"

Posted by Steve Douglass at 1:46 PM No comments: