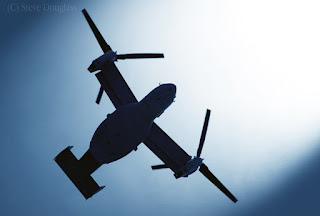 A spokesman for the 3rd Marine Aircraft Wing, the California-based unit that was responsible for the MV-22B Osprey, declined to comment on potential fatalities. Military and civilian first responders are at the crash site, he said.

“We ask for the public’s patience as we work diligently with first responders and the unit to identify what occurred this afternoon,” the Marines said in an emailed statement.

Officials in Imperial County, where Glamis is located, could not immediately be reached for comment, but county officials wrote on social media that they were aware of a downed aircraft and were providing assistance. Glamis, east of San Diego, is a desert area known for its sand dunes.

Osprey aircraft, used by the U.S. and Japanese militaries, take off and land vertically like helicopters but fly like airplanes. The MV-22B — which combines the flexibility of a chopper that can operate in diverse environments with the speed and range of a fixed-wing aircraft — is primarily used to transport troops and equipment in support of amphibious assaults.

Marines launch a ‘kamikaze’ drone from an Osprey aircraft

But the aircraft’s safety record has come under scrutiny. More than 40 people have died while flying on Ospreys since 1991.

In March, an Osprey crashed during NATO exercises in Norway, killing four American service members. In 2017, a Marine Osprey crashed in Syria, injuring two. That year, a crash in Australia also left three Marines dead. In 2014, an Osprey briefly lost power while flying over the Persian Gulf, resulting in one Marine fatality. One of the deadliest crashes came in April 2000, when all 19 Marines aboard a V-22 Osprey tilt-rotor aircraft were killed.

Posted by Steve Douglass at 8:06 AM No comments: