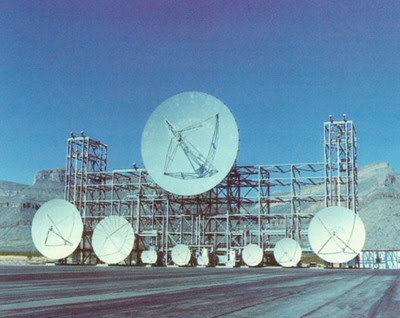 Except for the lush green, park-like campus of the Three Rivers School, the landscape on the northeast side of the White Sands Missile Range (containing the remote Stallion Base) was barren and foreboding.

There wasn’t any fence keeping people out of this part of the White Sands Missile Range, because the terrain looked so unforgiving that it was a given that the only ones who’d consider entering the range were either stupid or plain crazy.

Since they rarely encountered either type, going to the expense of putting up a fence to encircle a chunk or real estate the Devil himself would think twice about traversing seemed like a big waste of time and taxpayer’s money.

Because the land was considered so isolated and worthless, the military thought it be a great place to test the first nuclear bombs rightly thinking that no one would mind.

At the time (in 1944) The Tularosa Basin was deemed far enough from any major cities that the risk of nuclear fallout settling over a populated area was minimal, plus the fact the desert land was considered so absolutely worthless no one would care if it were blown up, scarred or contaminated. Any chance of anyone wanting to settle there was remote at best.

Therefore the White Sands Missile Range (previously known as the Alamogordo Bombing and Gunnery Range) became a testing ground for almost everything that went boom.

Taking up a huge chunk of New Mexico, bigger then some European countries, the 3,200 square miles of test ranges located inside WSMR (pronounced WHIZ-MER) has suffered the onslaught of constant daily bombardment from nuclear to conventional bombs and warheads.

An unbroken lineage starting with the firing of the first nuke, to the testing of captured World War II German V-2 rockets (leading directly to the formation of NASA and the manned space-flight program) also lead to space shuttles, satellites in orbit and landing men on the moon) all of which roots can be traced to this chunk of “worthless” real estate.

Although managed by the Army, every branch of the armed forces from the Navy to the Air Force has used WSMR for weapons development, weapons test and evaluation, experimentation and training.

Air Force and Navy pilots use the ranges at Red Rio to hone their targeting skills. The Navy has installed huge guns, like those on battleships, on mountaintops and lob explosive shells into the long-dried up ancient seabed at plywood ships.

On other mountaintops, futuristic metallic domes house laser and microwave turrets, part of ongoing experiments to perfect portable ray guns just like those portrayed in sci-fi movies like Star Wars.

A thirty-mile long cable stretches across the valley, strung between two mountaintops like a gigantic clothesline. On this cable hollowed-out hulks of antiquated fighter-jets hang like piñatas for use as gunnery targets for air-to-air combat practice.
To the south, just north of Holloman Air Force base are located the two Hypersonic Test Tracks, otherwise known as the world’s fastest rail system, spanning 50,000 feet of flat desert lake bed.

But no charming choo-choos chug along these tracks. Instead rocket driven sleds propel aerodynamic shapes at up to and beyond 6,000 miles per hour, proving future space systems and other aerospace hardware (including humans) to see if they can withstand the horrendous pressures that occur at when traveling many times the speed of sound.

To the east of Holloman is the White Sands Space Harbor, officially built as a secondary landing site for the Space Shuttle, but only used once in 1982.
The strip, located in Alkali Flats is perfectly maintained, one of the longest in the world (35,000 feet) and boasts a landing lights system so bright it can easily be seen from orbit.

Some Interceptors can’t help but wonder why the Space Harbor facility is being continuously maintained and upgraded to the tune of millions of dollars annually when it was used only officially used once over thirty years ago) as a auxiliary strip for Space Shuttle.

Some speculate it has some darker military purpose, possibly being the recovery base for a secret military mini-space shuttle known as the “XOV” or as pilots who have seen the craft call it “Speedy.”

On the far western side of WSMR, nestled against the mountains is RATSCAT, otherwise known as the Radar Target Scatter facility. It is here where some of the most secret work in the range is conducted.

Although from the air it looks like a landing strip, military and civilian pilots are told if they even attempt to land, their aircraft will be confiscated, they will be detained and interrogated and if they don’t have a great reason for landing there (unless they were piloting Air Force One, with the President and the Pope onboard, with all engines on fire) chances are they will lose their wings and be jailed.

As the Interceptors knew well, the radar signatures of present and future stealth aircraft are tested at RATSCAT, but it is so remote and located in an area so far from water, any attempt to hike to the facility would be to take one’s life into one’s hands.

Instead, Static, Freaks and the other Interceptors could only longingly gaze at RATSCAT through a high-powered telescope, its white parabolic dishes shimmering in low definition like a mirage, its secrets hidden from sight by a layer of hot atmospheric distortion making direct observation next to impossible.

GET THE BOOK TODAY FREE BY CLICKING HERE!
Posted by Steve Douglass at 11:39 AM No comments: