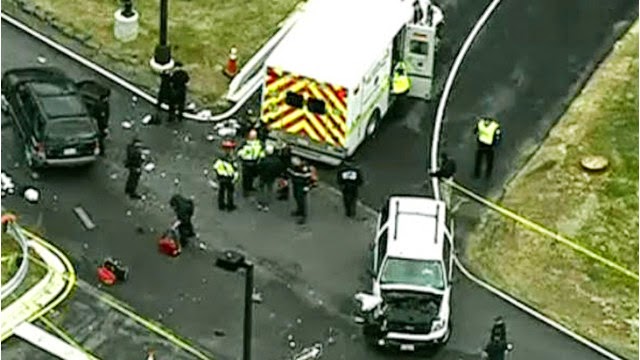 FORT MEADE, Md. (AP) — The warnings are strong and security is always tight, but most drivers are versed in the daily routine as thousands of employees and contractors stream through the closely guarded entrance to the National Security Agency.

The ordinary start to the work week came to a violent halt Monday, though, when two men dressed as women and driving in a stolen, dark-colored SUV ignored officers' orders at the gate to the spy agency headquarters at Fort Meade in Maryland. Police fired on the SUV, which then rammed into a police vehicle. One suspect was killed. The second suspect was injured, as well as a police officer.

Whether the pair wanted to breach the perimeter or the driver was desperate and confused in a security-sensitive area only added to the mystery of the officer-involved shooting.

The FBI's Baltimore field office said it was investigating the "shooting incident."

"The shooting scene is contained and we do not believe it is related to terrorism," spokeswoman Amy Thoreson said in a statement.

The bureau declined to comment on the conditions of the second suspect and officer, except to say they were being treated at a local hospital.

Authorities say the cross-dressing men stole the SUV Monday morning from a hotel in Jessup, Maryland, and ended up about seven miles away at the NSA gate at Fort Meade, a sprawling Army post.

Images from the scene showed emergency workers loading a uniformed police officer into an ambulance. Nearby were the dark-colored SUV and a white SUV emblazoned with "NSA Police," both heavily damaged.

"The incident has been contained and is under investigation," Army Col. Brian Foley, the Fort Meade garrison commander, said in a statement. "The residents, service members and civilian employees on the installation are safe. We continue to remain vigilant at all of our access control points."

The men were dressed as women, said a senior defense official who spoke on condition of anonymity because the official was not authorized to discuss an ongoing case.

Investigators have not determined how the man driving the stolen car died.

The SUV was stolen Monday morning, said Mary Phelan, a spokeswoman for the Howard County Police Department. She declined to name the hotel, citing the ongoing investigation, or release any further details, referring all questions to the FBI.

The FBI is investigating and working with the U.S. attorney's office in Maryland to determine if federal charges are warranted, Thoreson said.

It's not the first time someone has disobeyed orders at an NSA gate. In July, a man failed to obey an NSA officer's command to stop as he approached a checkpoint. The man drove away, injuring an NSA officer and nearly striking a barricade. He was later arrested and is awaiting trial on federal charges.

Earlier this month, police captured a man accused of firing at a building on the NSA campus. The man, who was also accused of shooting at vehicles, told police he heard voices.

Fort Meade is home to the NSA, the Defense Information Systems Agency and the U.S. Cyber Command. About 11,000 military personnel and about 29,000 civilian employees work on the property.

The NSA's presence is visible, with large satellite dishes and glass and steel buildings rising from the tree line. Chain-link fences marked with restricted access signs and topped with barbed wire run along the perimeter of the campus. Posted signs inform drivers of various exits for the NSA and Fort Meade, including one for deliveries, another for a visitors' center and one designated for employees.

READ THE REST OF THE STORY HERE
Posted by Steve Douglass at 10:40 AM No comments: