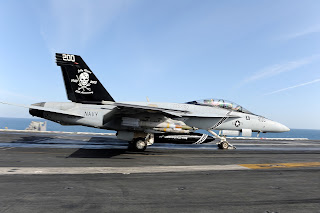 NAVAL SUPPORT ACTIVITY, Bahrain (NNS) -- No one was injured when an F/A-18F Super Hornet crashed into the water while operating near USS Dwight D. Eisenhower (CVN 69) in the North Arabian Sea, April 8.

Search and Rescue (SAR) swimmers from an SH-60F of HS-5 "Night Dippers" recovered the two aircrew and safely delivered them back to the carrier.

The two aircrew, from VFA-103 "Jolly Rogers" based in Virginia Beach, Va., safely ejected from their jet when it incurred an engine failure at 12:20 p.m. local time.

Eisenhower is homeported in Norfolk, Va., and is on a scheduled deployment to the U.S. 5th Fleet area of responsibility conducting maritime security operations and theater security cooperation efforts.

This incident is under investigation.
Posted by Steve Douglass at 12:38 PM No comments: