Do new revelations about latest Pentagon UFO study rule out extraterrestrial contact in the past? 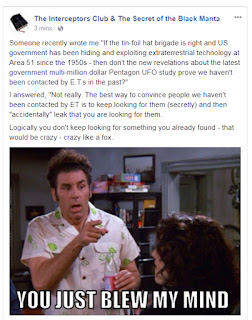 WASHINGTON — In the $600 billion annual Defense Department budgets, the $22 million spent on the Advanced Aerospace Threat Identification Program was almost impossible to find.

Which was how the Pentagon wanted it.

For years, the program investigated reports of unidentified flying objects, according to Defense Department officials, interviews with program participants and records obtained by The New York Times. It was run by a military intelligence official, Luis Elizondo, on the fifth floor of the Pentagon’s C Ring, deep within the building’s maze.

The Defense Department has never before acknowledged the existence of the program, which it says it shut down in 2012. But its backers say that, while the Pentagon ended funding for the effort at that time, the program remains in existence. For the past five years, they say, officials with the program have continued to investigate episodes brought to them by service members, while also carrying out their other Defense Department duties.

The shadowy program — parts of it remain classified — began in 2007, and initially it was largely funded at the request of Harry Reid, the Nevada Democrat who was the Senate majority leader at the time and who has long had an interest in space phenomena. Most of the money went to an aerospace research company run by a billionaire entrepreneur and longtime friend of Mr. Reid’s, Robert Bigelow, who is currently working with NASA to produce expandable craft for humans to use in space.

On CBS’s “60 Minutes” in May, Mr. Bigelow said he was “absolutely convinced” that aliens exist and that U.F.O.s have visited Earth.

Working with Mr. Bigelow’s Las Vegas-based company, the program produced documents that describe sightings of aircraft that seemed to move at very high velocities with no visible signs of propulsion, or that hovered with no apparent means of lift.Continue reading the main story

Officials with the program have also studied videos of encounters between unknown objects and American military aircraft — including one released in August of a whitish oval object, about the size of a commercial plane, chased by two Navy F/A-18F fighter jets from the aircraft carrier Nimitz off the coast of San Diego in 2004.

Mr. Reid, who retired from Congress this year, said he was proud of the program. “I’m not embarrassed or ashamed or sorry I got this thing going,” Mr. Reid said in a recent interview in Nevada. “I think it’s one of the good things I did in my congressional service. I’ve done something that no one has done before.”

Two other former senators and top members of a defense spending subcommittee — Ted Stevens, an Alaska Republican, and Daniel K. Inouye, a Hawaii Democrat — also supported the program. Mr. Stevens died in 2010, and Mr. Inouye in 2012.

While not addressing the merits of the program, Sara Seager, an astrophysicist at M.I.T., cautioned that not knowing the origin of an object does not mean that it is from another planet or galaxy. “When people claim to observe truly unusual phenomena, sometimes it’s worth investigating seriously,” she said. But, she added, “what people sometimes don’t get about science is that we often have phenomena that remain unexplained.”

READ THE REST HERE
Posted by Steve Douglass at 10:02 AM No comments: