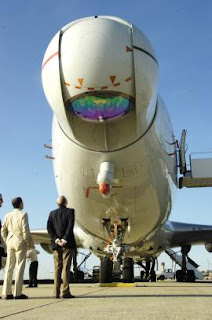 By JOHN REED
Published: 12 Feb 2010 12:34 PRINT | EMAIL
The U.S. Missile Defense Agency's airborne laser this week achieved a record first when it shot down a ballistic missile launched off the California coast.

The MDA's Airborne Laser Testbed, a Boeing 747 with a massive chemical laser in the nose, took off from Edwards Air Force Base, Calif., on Feb. 11 and fired its laser at "a short-range threat-representative ballistic missile … launched from an at-sea mobile launch platform," reads a Feb. 11 MDA announcement.

The laser locked on to the missile as it was rising in its boost phase and heated it to the point of "critical structural failure," the MDA statement said.

The agency said this was the first time a laser fired from an airplane in flight has been able to destroy a ballistic missile on the rise.

"This experiment marks the first time a laser weapon has engaged and destroyed an in-flight ballistic missile, and the first time that any system has accomplished it in the missile's boost phase of flight," reads a Feb. 12 Boeing announcement. The laser is the most powerful ever installed on an aircraft, according to the company.

The Airborne Laser (ABL) plane is designed to fly just beyond the range of enemy air defenses and use its laser cannon to shoot down ballistic missiles as they are taking off, which is extremely difficult to do today due to the incredibly high speeds that missiles fly.

"Having the capability to precisely project force, in a measured way, at the speed of light, will save lives," said Michael Rinn, Boeing's ALTB program manager, of the ABL in a Feb. 12 statement.
Posted by Steve Douglass at 5:32 AM No comments:

Operation Moshtarak isn't a walk in the park 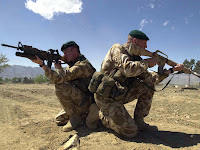 Marjah, Afghanistan (CNN) -- The Taliban put up a stiff resistance Sunday, as a coalition assault against the militant group entered its second day in southern Afghanistan.

Officials said they did not know how many Taliban fighters remained in the Marjah region of Helmand province but think they may be in the hundreds -- some of whom are holed up in civilian compounds.
Dawoud Ahmadi, the provincial spokesman, said 27 Taliban fighters have been killed. Afghan and international forces also discovered 2,500 kilograms (5,500 lbs) of explosives.

The Taliban spokesman for the Marjah area claimed six Taliban casualties and said militants had killed 192 Afghan and coaltion troops.

In the past, the Taluban has often inflated casualty fighures.

"NATO forces have not captured any areas in Marjah from the Mujahadeen," said Qari Yousif Ahmadi, the Taliban spokesman.

Dubbed Operation Moshtarak, the offensive was launched early Saturday by an international coalition of 15,000 troops including Afghans, Americans, Britons, Canadians, Danes and Estonians.
Hours into the offensive, small-arms fire killed a U.S. Marine, and an explosion killed a British soldier, according to a U.S. military official.

"The Taliban appear confused and disoriented," said Maj. Gen. Gordon Messenger, a British military spokesman. However, he tempered his optimism with the reminder that the operation was not over.
Long a bastion of pro-Taliban sentiment and awash with the opium used to fund the insurgency, the Marjah region has been known as the heroin breadbasket of Afghanistan and a place where the Taliban h

U.S. Marines swept into the area from north and south, a U.S. Marine Corps official told CNN. They established a ring of security, preventing anyone from leaving or entering the area, the official said.
In an effort to establish a foothold, troops launched air assaults followed by a ground offensive in rough terrain, a region crisscrossed by canals.

The terrain is so tough that four lightly wounded troops whose injuries normally wouldn't need medical evacuation had to be airlifted for treatment.
NATO forces announced the offensive before it started so that citizens could get out of harm's way.
In the past few days, forces from Afghanistan, Britain and other nations dropped leaflets in and around

Marjah warning residents not to allow the Taliban to enter their homes.
And meetings with local leaders, or shuras, have been held, as NATO forces tried to get Afghans on their side, the British military official told CNN.

Afghan President Hamid Karzai on Saturday urged Afghan and international troops to exercise "absolute caution" and ensure civilian safety.
However, there were at least two civilian injuries -- two teens whose house was taken over by the Taliban and used to attack U.S. troops, the Marines said.


Key challenges are determining the strength of the remaining insurgency and whether, after the offensive, Afghans will stick with their government.

Officials said they hope Afghan forces and the government will maintain control, win allegiance from the citizens and provide farmers with an alternative to the poppy crops that pervade the region.
Posted by Steve Douglass at 5:20 AM No comments: