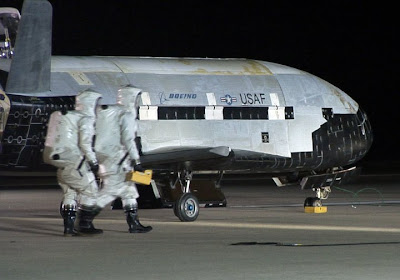 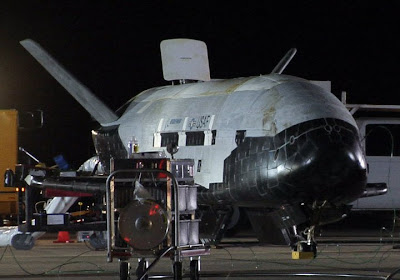 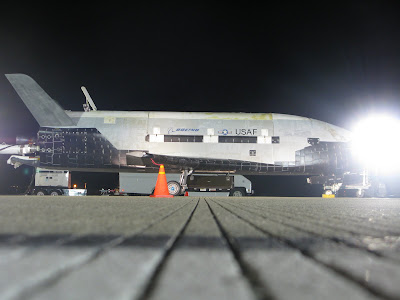 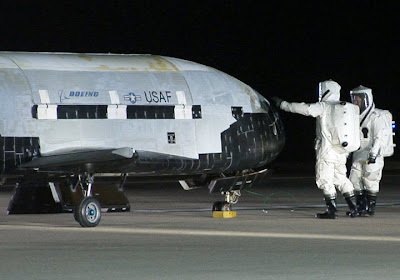 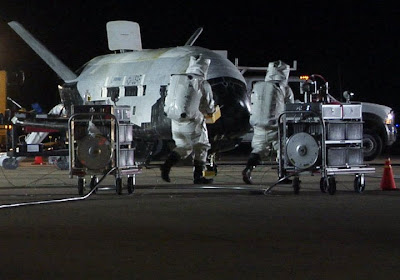 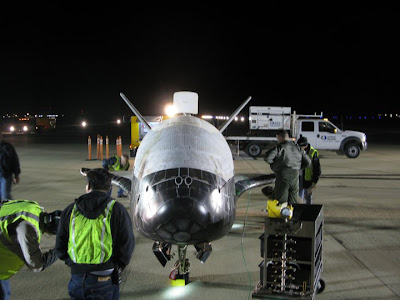 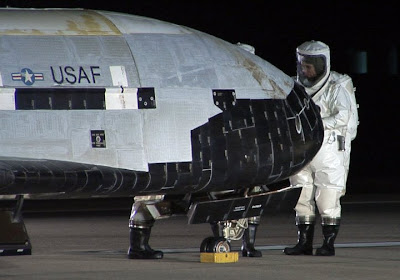 Flying back to Earth after nearly 225 days in space, the U.S. Air Force's X-37B space plane blazed through the atmosphere over the Pacific Ocean Friday and swooped into a California air base under the cloak of darkness.

Capping a secret mission in orbit, the unmanned spaceship touched down at 0916 GMT (4:16 a.m. EST; 1:16 a.m. PST) on the landing strip at Vandenberg Air Force Base, Calif.

The 15,000-foot-long runway was built to handle space shuttle landings, but Friday morning's return was the first time Vandenberg welcomed home a spacecraft from orbit. The West Coast facility has hosted more than 1,900 launches since the late 1950s.

It was the first time a robotic U.S. vehicle autonomously returned to Earth from space to land on a runway. Only the former Soviet Union's Buran space shuttle accomplished the feat before Friday morning.

The 29-foot-long space plane came home as an unpowered glider after firing its primary orbital maneuvering engine and slipping back into the atmosphere from an altitude of about 170 miles.

With wings and tail fins, the X-37B resembles a small space shuttle orbiter. But it does not contain a human crew and only carries a few hundred pounds of payload inside a cargo bay about the size of a pickup truck bed.

"We congratulate the Air Force Rapid Capabilities Office and the 30th Space Wing at Vandenberg Air Force Base on the success of this mission," said Paul Rusnock, Boeing vice president of experimental systems and program director for the X-37B. "This marks a new era in space exploration, and we look forward to the launch of the second vehicle in 2011. By combining the best of aircraft and spacecraft into an affordable, responsive unmanned vehicle, Boeing has delivered an unprecedented capability to the RCO."

The Rapid Capabilities Office is headquartered in the Secretary of the Air Force's office at the Pentagon and oversees new technological developments on the fast track for introduction into operational roles.

The budget for the X-37B, also called the Orbital Test Vehicle, is classified. The Air Force has not disclosed any of the craft's activities in space, other than saying engineers were testing its flight characteristics and demonstrating its high-tech systems.

The space plane is designed to enter the atmosphere, approach the landing site with the help of GPS navigation, then line up with the runway, drop its landing gear and slap down on the surface at nearly 300 mph.

Shielded by thermal blankets and a coat of ceramic and silica tiles, the X-37B was expected to brave more severe re-entry conditions than the space shuttle.

READ THE REST OF THE STORY HERE
Posted by Steve Douglass at 6:27 AM No comments:

'We will definitely air raid North Korea," Kim Kwan-jin said at his confirmation hearing when asked how they would respond if South Korea was struck again.
Kim was appointed defense minister last week amid growing tensions between the Koreas.