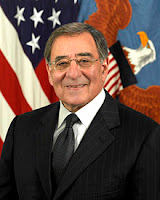 The United States will take "all necessary and proper steps" needed to deal with the ongoing hostage situation in Algeria, Defense Secretary Leon Panetta told ABC News' Martha Raddatz in an exclusive interview, although he cautioned that American officials fear the information coming out of the African country is "pretty sketchy."

Panetta also provided new details about Syria's mixing of chemical weapons in December and the clearest explanation yet of the Obama administration's red lines if the Assad regime uses the weapons against its own people.

Panetta was interviewed by Raddatz as he traveled to visit U.S. Army soldiers in Vicenza, Italy. The defense secretary is on a European trip that he has characterized as his final trip overseas while in his post.

Panetta described the hostage taking at the gas complex at In Amenas as a "terrorist act" undertaken by terrorists affiliated with al Qaeda.

The "United States takes that very seriously, when our citizens are put in jeopardy by terrorists," he said.

Panetta added that he is not certain that the motive of the attack was retaliation for the French military intervention in Mali, as the hostage takers have claimed.

"All I do know is that when you're dealing with affiliates of al Qaeda, that they're terrorists and they will do terrorist acts," he said. "And that's what they've done here.

"They have total disregard for innocent men and women and children," he added. "And it's reflected in what they just did here in Algeria."

Panetta made his comments prior to reports that the Algerian Army had launched a military strike targeting the hostage takers that resulted in an undetermined number of fatalities among both hostages and hostage takers.

Panetta told ABC News that as many as 100 hostages were being held at the facility at In Amenas and that there might be seven or eight Americans among them.

He said the U.S. government was looking at "all of the necessary steps that we need to take in order to deal with that situation."

A U.S. official told ABC News that a Predator drone was providing surveillance over the Ain Amenas facility.

He added, "We have not seen intelligence that they have deliberately used this against their own people."

U.S. officials have consistently avoided confirming news reports that, in early December, U.S. intelligence determined that elements of the Syrian regime mixed precursors to sarin gas into bombs located near Syrian airfields. At the time, President Obama issued a strong warning to the Assad regime that it could face undetermined consequences should chemical weapons be used against the Syrian people.

At a news conference in December, Panetta said, "There will be consequences if the Assad regime makes a terrible mistake by using these chemical weapons on their own people."

READ THE REST OF TEH STORY HERE
Posted by Steve Douglass at 5:40 AM No comments: