Thunder Over Houston Area May Be Jets! 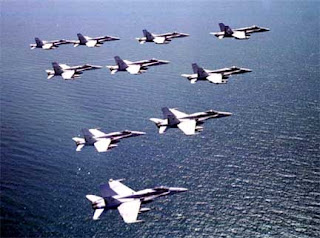 The U.S. military has issued advanced warning that jet fighters could be scrambled in the Houston area on Oct. 6 as part of military exercises.

North American Aerospace Defense Command will conduct the flights in the skies over Southeast Texas. The pre-planned flights will take place in the late morning and early afternoon and residents should expect to hear and see NORAD fighter jets as they practice intercept and identification procedures.

Although exact flight plans were not divulged, a NORAD spokesman at Peterson Air Force Base in Colorado said Houston airspace “could be included” in the exercises.

NORAD has conducted exercise flights of this nature throughout the United States and Canada since the start of Operation Noble Eagle, the command’s response to the 9/11 terrorist attacks.
Posted by Steve Douglass at 1:59 PM No comments: