Al-Qurayshi detonated a bomb that killed himself and several other people, including his wife and children, as U.S. special operations forces approached with the intention of capturing him, Biden said.

First responders reported that 13 people were killed, including six children and four women. Senior administration officials who spoke on the condition of anonymity said those numbers don't match their assessment of casualties.

"Thanks to the bravery of our troops, this horrible terrorist leader is no more," Biden said at the White House.

U.S. forces landed in helicopters and assaulted a house in a rebel-held corner of northwest Syria, clashing for two hours with gunmen, witnesses said. The commandos were aided by helicopter gunships, armed Reaper drones and attack jets.

Al-Qurayshi, who sometimes went by the name of Hajji Abdullah Qardash, was killed on the third floor of a house where he was living. One of his lieutenants barricaded himself and his family on the second floor during the raid. He and his wife fired on U.S. troops and were killed in the battle, officials said. Several children on the second floor left safely after the gunfire.

The operation "took a major terrorist leader off the battlefield and sent a strong message to terrorists around the world: We will come after you and find you," Biden said.

U.S. troops were on the ground for about two hours, Pentagon press secretary John Kirby said.

Biden said he asked the Defense Department to take every precaution to prevent civilian casualties, which is why the decision was made to undertake a more risky special operations forces raid instead of targeting al-Qurayshi with an airstrike.

“These efforts included a deliberate decision by the president to execute a raid on the location as opposed to an airstrike despite the additional risks that that decision put on our forces,” Kirby said.

After U.S. special operations forces called on al-Qurayshi to surrender, a large explosion ripped a hole in the third floor of the building, ejecting the body of al-Qurayshi and others to the ground. The blast was likely too large to have come from a suicide vest, Marine Gen. Kenneth McKenzie, commander of U.S. Central Command, said in remarks Thursday afternoon to the Middle East Institute.

U.S. troops entered the building after the explosion and engaged in a firefight with a deputy of al-Qurayshi on the second floor, Kirby said. The man and his wife fired on the troops and were killed. A child was killed there, too.

“With no regard to the lives of his own family or others in the building, he chose to blow himself up … rather than face justice for the crimes he has committed, taking several members of his family with him,” the President said.

“Last night’s operation took a major terrorist leader off the battlefield, and it sent a strong message to terrorists around the world: We will come after you and find you,” Biden added.
MORE HERE:
THE DRIVE:
'One of the MH-60s involved was lost during the infiltration phase of the mission, with multiple photos of the wreckage now having been posted to social media. The Pentagon confirmed that the helicopter was forced to land after a technical problem and was then destroyed by a combination of demolition charges and munitions launched from an F-16 fighter jet, although some parts of the helicopter remained intact." 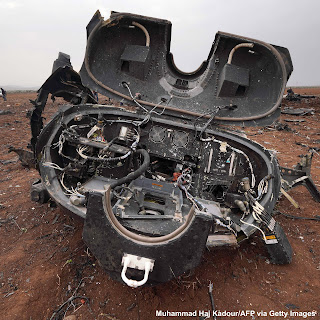 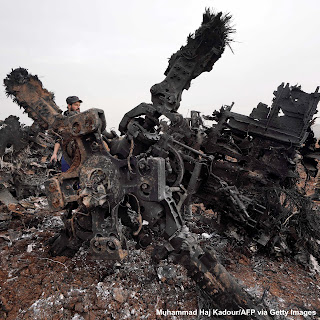 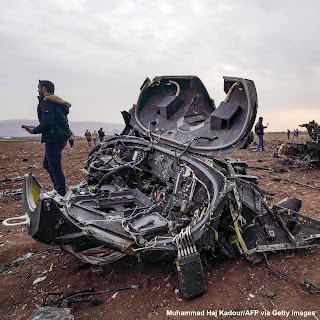 Posted by Steve Douglass at 1:37 PM No comments: