Passing asteroid 'not something to worry about' 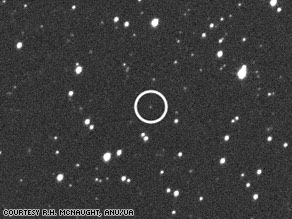 (CNN) -- You had a close encounter with a 40-yard-wide asteroid this week, but the astronomer who first spotted the large rock said it's nothing to worry about.


An asteroid (inside circle) passed within 38,000 miles of Earth on Monday.

Asteroid 2009 DD45 on Monday passed within 38,000 miles of Earth, less than twice the height of the geostationary satellites we depend on for communications, according to Robert McNaught of the Australian National University.

McNaught, who watches for asteroids with his telescope 250 miles northwest of Sydney, Australia, discovered the approaching rock last week.

While a direct hit on Earth could be a devastating natural disaster, McNaught said keeping track of asteroids can make a hit "potentially preventable."

"If discovered in advance and with enough lead time, there is the possibility of pushing it off course, if you have decades of advance warning," McNaught said. "If you have only a few days, you can evacuate the area of impact, but there's not a great deal [else] you can do."

In either case, he said, a global catastrophe as depicted in Hollywood movies such as "Deep Impact" is "very, very unlikely."

The 2009 DD45 asteroid circles the sun every 18 months, but its path will not threaten this planet at least for the next century, he said.
Posted by Steve Douglass at 7:03 PM No comments:

Dave Fulghum's post on renewed activity with non-expendable high-power microwave (HPM) weapons reminded me of an offhand comment at a conference in 2006, where a US officer commented that - in the USAF - HPMs and unmanned combat air vehicles (UCAVs) were so intimately linked that in Air Combat Command, they belonged to the same office.

What might be a big clue emerged in one USAF presentation a few years ago, in the form of a single piece of artwork:

What it shows makes a lot of sense. An HPM is going to work best pointed straight down. since you don't want to defocus the energy by smearing it along the ground. Also, like radar, HPM likes a large antenna (equals narrow beam), and how better to install one - particularly in a small stealthy platform - than horizontally in the weapon bay, aiming down?

Of course, then you need to overfly the target and get as close as possible (effectiveness diminishes with range) and a very stealthy UCAV is a good way to do that. It also avoids any health hazards to an operator, who'd otherwise be sitting a few feet away from a gigawatt-class microwave source.

By the way, someone who appeared very confident in the results of his studies assured me a few weeks ago - quite categorically - that the US already has UCAVs in service, developed and operated in the black world. So maybe that UCAV/HPM office got something done.

Posted by Steve Douglass at 7:01 PM No comments:

Obama offered the deal in a letter hand-delivered to Russian President Dmitri Medvedev in Moscow last month by top administration officials, the newspaper reported, citing U.S. officials it did not identify.

A senior U.S. official confirmed to Reuters that Obama had sent a letter on the subject to his Russian counterpart.

"We can confirm that President Obama sent a letter to President Medvedev," the senior U.S. official said.

"The letter touched on a range of subjects, including missile defense and how it relates to the Iranian threat."

Russia vehemently opposes the deployment of a U.S. missile defense system in Poland and the Czech Republic. The system was proposed by the administration of former President George W. Bush.

Moscow has not yet responded to Obama's offer, the report said.
Posted by Steve Douglass at 6:14 AM No comments: