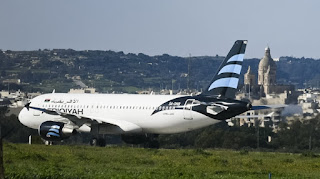 UPDATE:Two hijackers of a Libyan passenger plane, purportedly supporters of the late Libyan leader Moammar Gadhafi, surrendered Friday after diverting the Afriqiyah Airways jetliner from the north African country to the island of Malta, authorities said. All 118 people aboard left the plane safely.

Malta state television TVM said the two hijackers threatened to blow up the Airbus A320. All flights to Malta International Airport were immediately diverted after the mid-morning landing, and emergency teams including negotiators were sent to the airport tarmac.

Muscat said there were 111 passengers aboard — 82 males, 28 females and one infant. The Times of Malta said it also had seven crew members.

MALTA -Passengers have begun disembarking from the hijacked Libyan aircraft in Malta.


The doors of the plane opened at 1:44 p.m. local time and a staircase moved to the door before passengers began disembarking.

An official from Afriqiyah Airways said the two hijackers had expressed a willingness to release the passengers but that they will keep the pilot.

Serraj al-Fitouri also told Dubai-based Al-Arabiya TV that one Libyan lawmaker was among the list of passengers. It was unclear whether the lawmaker, identified as Abdel-Salam al-Marabet, had been on the flight that was hijacked earlier Friday.

A flight within Libya has been hijacked and diverted to Malta, with 118 people on board.

There were 28 women and one infant on the plane when it landed, according to earlier tweets from Muscat.

Two hijackers claiming to be armed with a hand grenade took over the the Afriqiyah flight, which was set to fly from Sebha to Tripoli, according to The Times of Malta. It's not clear what their demands are.

Video posted by the Times of Malta shows the plane sitting on the ground, with security forces gathered nearby.

"All flights into Malta International Airport have been diverted," the AP writes. "Muscat's office confirmed that a negotiating team is on standby awaiting instructions from the prime minister.

Reuters reports that the plane's pilot alerted flight control authorities of the hijacking:


"A senior Libyan security official told Reuters that when the plane was still in flight on Friday morning the pilot told the control tower at Tripoli's Mitiga airport it had been hijacked.

" 'The pilot reported to the control tower in Tripoli that they were being hijacked, then they lost communication with him,' the official said, speaking on condition of anonymity.

" 'The pilot tried very hard to have them land at the correct destination but they refused.' "
Posted by Steve Douglass at 5:23 AM No comments: