Meet the new boss - same as the old boss. 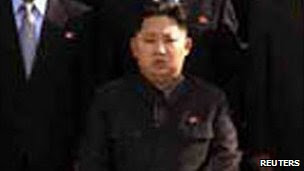 North Korean has released video footage and a photograph which appears to show the heir apparent Kim Jong-un.

It is the world's first up-to-date glimpse of the young man who appears set to succeed his father, Kim Jong-il, in a gradual transfer of power.

He is pictured sitting on the front row in a group shot of senior leaders.

The TV footage shows him at this week's rare meeting of the ruling Workers' Party, where he was promoted to top political and military positions.

Kim Jong-un, who is thought to be about 27 years old, was named vice-chairman of the Central Military Commission of the Workers' Party and was appointed to its central committee, state media said.

Mr Kim was also given the rank of a four-star general.

Kim Jong-il, thought to be in poor health, was re-elected as leader at the party's first congress for 30 years.

A North Korean delegation has now gone to China, reportedly to brief officials about the meeting.

Rapid rise
One day after the historic conference drew to a close, North Korea state television screened pictures of the event.

The leader's son, Kim Jong-un can be seen applauding along with the other senior officials.

It's a somewhat pudgy one, showing as we'd expect a young man much better fed than the overwhelming majority of his fellow countrymen.

Kim Jong-un's remarkable, rapid promotion this week to senior military and political office has already been reported - his first ever mention by name - in North Korea's government-controlled press.

But his special family connection has not been made clear. Now, for your average North Korean poring over the group photograph of the assembled officials, the symbolism won't need to be explained.

Kim Jong-un's front-row proximity to his father, as well as the clear family likeness, makes it all too clear.

Here is the chosen successor, with for good measure, the backing of the military, represented by a stern-faced officer in the middle.

Kim Jong-un's remarkable rise
The official photograph was published on the front page of a state-controlled North Korean newspaper, the Rodong Sinmun.

It showed 200 officials at the Workers' Party convention. Seated in the front row, just two seats along from his father, is Kim Jong-un.

Although the caption did not identify him, state media reported that he had attended the photo session.

Previously only grainy images from his childhood have been seen in the West.

The BBC's John Sudworth in Seoul says the family likeness is clear, and North Koreans, seeing the photo for the first time, are unlikely to miss the significance.

Kim Jong-un is Kim Jong-il's third son and had already been identified as the most likely successor to the Communist dynasty started by his grandfather, Kim Il-sung, in 1948.

Our correspondent says his rise is remarkable, even by the standards of one of the world's most totalitarian states.

He says there can now be little doubt that Swiss-educated Kim Jong-un has been chosen to eventually take over from his ailing father, who is thought to have had a stroke in 2008.

Analysts say that, at least, confirms that, although thin and frail, he is well enough to attend and seemingly still in control.
Posted by Steve Douglass at 7:06 AM No comments: