Spying on the spooks ... 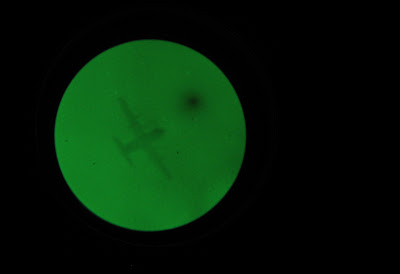 A MC-130 Dragon Spear from Cannon AFB has been "secretly" orbiting over Amarillo tonight.

I couldn't help but notice my apartment complex seemed to be in the center of his orbit - either that or I'm just paranoid.

He was running dark most of the time- but I could hear his engines and were monitoring his communications with Albuquerque Center.

Interesting enough while Ken and I were talking about the aircraft - on cell phones Ken threw in a few keywords " and said , "I wish Obama would bomb Allah at Admiral Ackbar's palace."- as a joke.

We were amazed to see the MC-130s orbit change to include Ken's place who is about seven miles away as the crow flies. I can't help but wonder what the monitoring suite on the aircraft can do.

I cobbled my digital Cannon to my Russian night vision scope and turned the tables on our high flying spy friend and captured a fairly decent snap of a military aircraft flying at night.

Say hello to the rest of the spokes back at Cannon for us!
Posted by Steve Douglass at 9:14 PM 1 comment:


After an intense search, a crew of amateur satellite sleuths has spotted the U.S. Air Force's second X-37B space plane – a robotic spacecraft that launched into orbit March 5.

The mission of the unmanned X-37B space plane, which is known officially as the Orbital Test Vehicle 2 (OTV-2), is shrouded in secrecy. The Boeing-built spacecraft is believed to be involved in reconnaissance — perhaps testing powerful sensors for a new generation of spy satellites. It looks much like a small version of NASA's space shuttles and blasted off from the Space Launch Complex 41 at Cape Canaveral Air Force Station in Florida.

While its mission is secret, the OTV-2 itself has attracted the eyes of dedicated skywatchers hoping to spot it in orbit just as they saw its predecessor – the first X-37B spacecraft, OTV-1 – during the OTV-1's months-long flight last year.

Fetter was successful in getting video of the OTV-2 gliding past the binary star Eta Serpentis on March 24. The OTV-2 and the star can easily be seen with the naked eye, shining at a magnitude 3 on the scale astronomers use to measure the brightness of sky objects (with the lowest numbers representing the greatest brightness).

Many satellites and spacecraft are regularly tracked by skywatchers. The International Space Station, for example, can appear to the unaided eye to outshine Venus and the brightest star in the sky, Sirius, under optimum viewing conditions. [Photos: Spotting Spaceships From Earth]

But to find satellites and spacecraft in orbit, skywatchers need to know ahead of time where to look. The secretive nature of the OTV-2's mission for the U.S. military made that task very difficult.

Once the OTV-2 launched, satellite watchers started scanning the skies for a glimpse of it. Skywatcher Ted Molczan of Toronto developed a set of orbital elements based chiefly on last year's OTV-1 flight to help prospective observers in the search.

And days after the launch, on March 9, Molczan announced that OTV-2 had been sighted by satellite tracker Greg Roberts of Cape Town, South Africa. Roberts spotted the spacecraft "in difficult observing conditions," Molczan reported.

READ THE REST OF THE STORY HERE
Posted by Steve Douglass at 1:29 PM No comments: