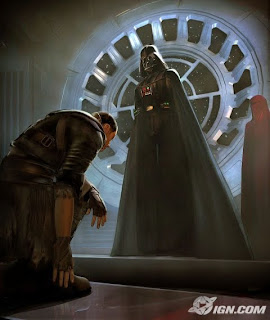 Shortly after it was installed on the International Space Station, fighting broke out among the astronauts over who got the office with the window.

Space Station Gets Room With A View 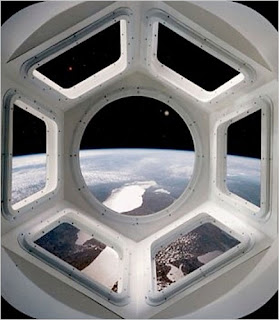 NASA’s Room With a View
By PHIL PATTON
Published: February 20, 2010

Ten years after astronauts first moved into the International Space Station, they finally installed a picture window last week to take in the neighborhood.

The Italian-built “cupola,” delivered by the shuttle Endeavour, has seven large windows centered on a 30-inch central pane. NASA calls the cupola “the largest window ever built for space.” Until now, space travelers have had to be content with the view from portholes.

NASA refers to the cupola as a control tower, and it does resemble an early 1930s airport control tower. Its primary role is functional. It will provide astronauts with a view of the space station’s exterior robotic arm and of visiting spacecraft docking with the space station. But the $27 million cupola also provides a panoramic view of Earth and the surrounding cosmos.

Last Wednesday, the protective shutters covering the windows were opened for the first time. Africa’s Sahara Desert filled the view. “The astronauts who are accustomed to views that you and I cannot really describe were moved to tears when they looked out the windows of the cupola for the first time,” Bob Dempsey, the NASA flight director for the mission, said.

Windows have always been important to astronauts. In “The Right Stuff,” Tom Wolfe told of how the first American astronauts had to beg for a window in their tiny capsules.

Engineers hate windows. They are vulnerable to micrometeorite strikes. They admit sunlight that increases the heat load when, in the space station’s case, it orbits through the day half of the earth. The seals can deteriorate after years of enduring the drastic temperature changes in space.

To address some of those dangers, the cupola’s windows come with shutters.

Julie Robinson, a space station scientist, said in a NASA news release that “crews tell us that Earth-gazing is important to them. The astronauts work hard up there and are away from their families for a long time. Observing the Earth and the stars helps relax and inspire them.”

The new window is reminiscent of dramatic round windows in classical buildings, like the duomo in Florence or Thomas Jefferson’s Monticello. It also resembles the cupola-like cockpit of the Millennium Falcon, Han Solo’s spaceship in “Star Wars,” and Captain Nemo’s giant porthole in the study of the submarine Nautilus in “20,000 Leagues Under the Sea.” The cupola attaches to a new section of the station with waste-processing equipment, exercise gear and some living quarters, including more comfortable sleep stations. It used to be known as Node 3. Now it is named Tranquility.

It is late in the game for the window to arrive. The station is almost complete. Only four more shuttle flights are scheduled. The station was originally supposed to be vacated after 2015, although President Obama has proposed extending its life to 2020. Adding the cupola now has a bit of the feel of a suburban home owner trying to spruce up his dull tract house by installing a bay window in the family room.

But the view is to kill for.
Posted by Steve Douglass at 7:34 PM No comments:

Tough road ahead in Afghanistan

CNN) -- As coalition and Afghan forces entered the second week of a major offensive against the Taliban in southern Afghanistan, the head of U.S. Central Command warned that the potential loss of lives among U.S. forces in the operation "will be tough."

Gen. David Petraeus said the losses could be comparable to those seen after the 2007 surge of U.S. troops into Iraq.
"They'll be tough. They were tough in Iraq," Petraeus said on NBC's "Meet the Press."
From the time the U.S. surge in Iraq began in January 2007 until its official end in July 2008, 1,125 U.S. troops died -- more than a quarter of the total 4,379 Americans who have died in the Iraq war.
"The reality is that it's hard, but we are [in Afghanistan] for a very, very important reason, we can't forget that," he added.

"We're in Afghanistan to ensure that it cannot once again be a sanctuary for the kinds of attacks that were carried out on 9/11."

Despite stiff Taliban resistance to Operation Moshtarak in Helmand province, Petraeus said that the militants are "a bit disjointed at this point in time."

"When we go on the offensive, when we take away sanctuaries and safe havens from the Taliban and other extremist elements that we and our Afghan and coalition partners are fighting in that country, they're going to fight back," he added. "And we're seeing that in Marjah, we will see that in other areas, but we are going after them across the spectrum."
Petraeus noted that the offensive is just the "initial salvo" of what will be a 12- to 18-month military campaign, but results are being seen already.

"We have more of our special operations forces going in on the ground, and you've seen the results, you've heard some of the initial results of that with more ... Taliban shadow governors being captured, more of the high-value targets being taken down."
See more Afghanistan coverage at Afghanistan Crossroads blog

The Central Command chief also addressed his group's assessment of al Qaeda, following a dust-up a week ago between former Vice President Dick Cheney and current Vice President Joe Biden.
Biden had argued that another massive terror attack against the United States, like the one on September 11, 2001, was "unlikely."

But Cheney called that analysis "dead wrong," and said the biggest threat facing the United States now is a potentially huge terror attack with nuclear weapons or biological agents.
Petraeus said the assessment of the U.S. Central Command is that al Qaeda has been "diminished" in the past year.


"But ... al Qaeda is a flexible, adaptable -- it may be barbaric, it may believe in extremist ideology as it does -- but this is a thinking, adaptive enemy and we must maintain pressure on it everywhere."
Posted by Steve Douglass at 7:31 PM No comments: