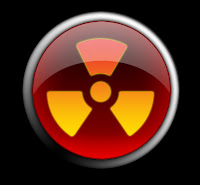 There doesn't seem to be any official word from U.S. defense officials online yet, but'if North Korea is preparing for another missile launch, then the Ground-based Midcourse Defense System of ballistic interceptors based in Alaska and California'probably is on alert.

The New York Times is reporting that North Korea said today it was preparing to send a satellite into orbit in what U.S. and South Korean officials believe will be a provocative test of a long-range missile capable of reaching parts of North America. CNN is reporting it too.

The statement said North Korea 'envisages launching practical satellites for communications, prospecting of natural resources and weather forecast, etc. essential for the economic development of the country in a few years to come and putting their operation on a normal footing at the first phase of the state long-term plan for space development.'

The move comes as U.S. and South Korean officials warned the enigmatic North in recent days not to do so. 'We have made it clear that we consider it both provocative and unhelpful,' Secretary of State Hillary Clinton said.''And we will continue to seek ways to discourage them from launching a missile for any purpose.'

U.S. officials declared themselves pleasantly surprised with GMD when they placed it on an extended, 40-day alert in mid-2006 ahead of North Korea's infamous July 4 ballistic missile tests. The alert provided an effective shakedown of the system and allowed the team to work out bugs that could not have been discovered any other way, GMD prime Boeing and Missile Defense Agency officials said through 2007.

North Korea test launched a number of missiles that day'including a long-range Taepodong-2 that might have been capable of reaching some non-continental U.S. states and territories. All splashed down harmlessly in the Sea of Japan, and in fact may have fizzled quickly.

As Aviation Week reported in mid-2007, those launches, as well as ballistic missile demonstrations by Iran, have driven U.S. officials to make plans for simultaneously operating and testing their defenses, which include radars in the U.S., Europe and Pacific region, space-based detectors and interceptors at Ft. Greely, Alaska, and Vandenberg AFB, Calif.

BBC has an excellent wrap-up of North Korea missile mania too.

Posted by Steve Douglass at 1:54 PM No comments:

How About a Nice Game of Chess?

How About a Nice Game of Chess?: "

The U.S. Navy is starting the process to find a '21st-century successor' to the Trident strategic missile submarine, defense officials have announced. The thing is - and here's where it could get really interesting - the United States could very well be completely redefining what its strategic deterrence needs are starting this year.

Tridents are nuclear-powered, Ohio-class submarines. At 560 feet long and 42 feet wide, they are the largest submarines in the Navy’s inventory. The first, the USS Ohio, was commissioned in 1981. The USS Wyoming finished its 38th patrol Feb. 11, marking the 1000th completed patrol of a Trident since the Ohio embarked on its initial patrol in October 1982. The Wyoming was commissioned in July 1996 and began its first patrol in August 1997. Clearly the older versions are getting up there in years.

The 14 nuclear-missile carrying Trident submarines provide more than half of America’s strategic deterrent capability, according to DOD. In 2006, the USS Ohio was converted into a guided-missile submarine, as were three others from the class to provide covert, special forces-friendly platforms.

Still, the Pentagon is about to start its Quadrennial Defense Review, as well as a Nuclear Posture Review. Besides giving President Barack Obama and his new administration the chance to genuinely recraft the U.S. military to their own vision, the reviews come as debate has increased in Washington over the nature of nuclear deterrence in the era of global antiterrorism and counterinsurgency conflicts, irregular warfare like cyber and post-Cold War assumptions (e.g., Russia and China aren't as much enemies as the USSR). Indeed, the vice chairman of the Joint Chiefs of Staff noted last week that today's threats are much more diverse and involve ‘a much broader spectrum of conflict against a much broader number of enemies, to include those that are not nation-states.'

Not surprisngly, those outside the Pentagon are not content to just sit back and await the new findings, which won't come until much later this year, at least. Meantime, electrons everywhere are falling victim to tomes of outside evaluations, including:

Future of the Nuclear Security Environment in 2015: Proceedings

What deterrence means in the age of suicide bombers, religious movements, non-kinetic acts of hostility and existing nuclear weapons, and how nuclear weapons falls into them, seems far from being figured out -'and we're at least eight years into it. I think we're in for a heckuva debate, and one that could go down in the annals of great military history and political science.

Posted by Steve Douglass at 1:54 PM No comments:

No Flight Date: "NASA managers want more time to evaluate the danger from a tiny space shuttle engine valve that failed during the most recent flight, and won't set a launch date for the upcoming flight of the shuttle Discovery until next week.

After a 13-hour flight readiness review at Kennedy Space Center, associate administrator William Gerstenmaier gave the shuttle program until next Wednesday to lay out a plan for finishing the testing and analysis necessary to clear the flight. At issue is whether another valve failure would sent a tiny part hurtling into the plumbing that keeps the shuttle's main hydrogen tank pressurized with enough force to cause a potentially dangerous leak.

Although that possibility apparently has existed since the first shuttle flight, new inspection and analysis tools indicate that the valve should be redesigned for safety. The upcoming work will determine if it is safe to keep flying with the existing design with inspection using the new tools.

The launch of the STS-119 mission with the fourth and final U.S.-built solar array wing for the International Space Station had most recently been scheduled Feb. 27, but that date will slip. The shuttle program needs to get the mission underway before about March 13 to avoid a conflict with an upcoming Russian Soyuz mission to the ISS. After that date, the next time the shuttle could launch without a Soyuz conflict would be about April 7, Gerstenmaier said at a Kennedy Space Center press conference tonight.

John Shannon, the shuttle program manager, said most engineers participating in the flight readiness review believed it would be safe to fly on Feb. 27. But enough questions remained about the results of tests simulating the effects of a loose piece of the suspect valve in the orbiter end of the plumbing to warrant more work.

'I believe we'll be able to put a plan together and make sure we answer those questions before the new launch date,' Shannon said. 'We were not that far away.'

Posted by Steve Douglass at 7:55 AM No comments: 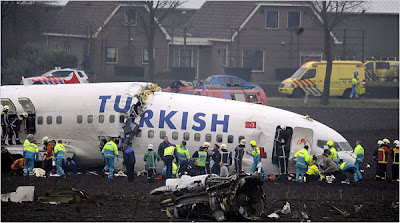 (CNN) -- A Turkish passenger jet crashed as it tried to land in Amsterdam Wednesday, killing at least nine people and injuring more than 50, 25 seriously, Dutch airport authorities have said.

Reports say that some survivors escaped from the plane through cracks in the fuselage.

The Turkish Airlines Boeing 737-800, which had 127 passengers and seven crew members, broke into three pieces on impact in a field near Schiphol Airport.

A news photographer at the scene said he saw an unknown number of bodies lying under a white blanket, Maaike Voersma, a journalist with Dutch newspaper De Bers, told CNN.

A passenger on the plane who spoke to Turkish network DHA said he saw injured people trapped and squeezed between the seats when he walked off the plane. iReport: Send your videos, stories


The Boeing 737-800, which originated from Istanbul, Turkey, was trying to land at Schiphol when it went down at about 10:40 a.m. local time, Dutch airport officials said.

PARIS — A Turkish Airlines jet carrying 135 people crashed into a field on its approach to Schiphol Airport outside Amsterdam on Wednesday, killing nine people and injuring 50, airport authorities and Turkish officials said.In Ankara, Suat Hayri Aka, a senior transportation official, told a news conference that 20 of the injured appeared to be in a serious condition. Television pictures showed the aircraft, a Boeing 737-800, lying fractured into three parts after it slammed into the grass about 3 miles from the runway. The aircraft did not catch fire.

The crash took place in calm weather with a light drizzle. Unlike a deadly accident in Madrid last summer when a Spanair flight crashed while taking off, no fire broke out during Wednesday’s crash.

The Turkish aircraft would have been low on fuel as it approached its destination.

As rescue operations got underway at the crash site, 80 passengers were evacuated from the plane, Binali Yildirim, the Turkish transportation minister, said on NTV, a private television station in Turkey.

“The plane has been through all required security controls,” Mr. Yildirim said.

Tuncer Mutlucan, a passenger who survived the crash, told NTV, “It was the back of the plane that hit the ground. We left the plane from the back. My colleague and I saw people stuck in between seats as we were trying to leave and we tried to help them.”

“ It all happened in something like 10 seconds,” Mr. Mutlucan said.

Candan Karlitekin, the chairman of Turkish Airlines, said most of the injured were seated at the back of the plane.

“There was nothing extraordinary about the weather conditions, vision capability was 4,500 meters. Around 500 meters away from the landing strip, the plane landed in a field. The plane was broken into three parts, as you all saw in pictures.”

Mr. Kotil said that the pilot, Hasan Tahsin Ari, was one of the airline’s most experienced pilots. The company was planning a flight from to Amsterdam from Istanbul for relatives of the crash victims.

Caroline Brothers reported from Paris, and Sebnem Arsu from Istanbul.

Pictures from the scene showed the plane broken in three pieces. One tear was in front of the wing, splitting the "Turkish" logo in two, and a larger tear was farther back along he fuselage.

Read the full story at cnn.com
Posted by Steve Douglass at 5:06 AM No comments: