Could Russian meteor could have been part of asteroid swarm? 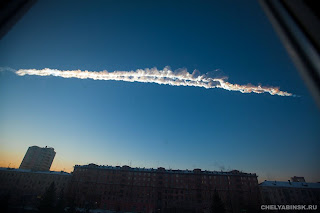 (CBS News) It's possible the giant meteor that slammed into Russia Friday morning has something to do with the asteroid -- known as 2012 DA14 -- that's expected to soon fly by Earth, according one expert.

CBS News contributor Michio Kaku, a physics professor at the City University of New York, explained on "CBS This Morning" that, though based on video evidence the European Space Agency has not seen any direct relationship between the house-sized meteorite and the asteroid, "asteroids occur in swarms" so "it's very possible that there's a swarm of asteroids around DA14."

The DA14 -- an asteroid a half a football field across, traveling at a blistering 4.8 miles per second -- is expected to pass within just 17,200 miles of Earth on Friday, a record close encounter that will carry it well inside the orbits of communications satellites.

Faced with questions about the asteroid and safety on Earth, Kaku pointed to the moon's pockmarked look as a sign of what's spinning around in space: "The moon is pockmarked because there are a million objects of that size near the orbit of the planet Earth."

He added, "The Earth is moving in a cosmic shooting gallery."

NASA Scientists have determined the Russia meteor is not related to asteroid 2012 DA14 that paassed safely pass Earth today at a distance of more than 17,000 miles. Early assessments of the Russia meteor indicate it was about one-third the size of 2012 DA14 and traveling in a different direction.

Posted by Steve Douglass at 12:34 PM No comments: 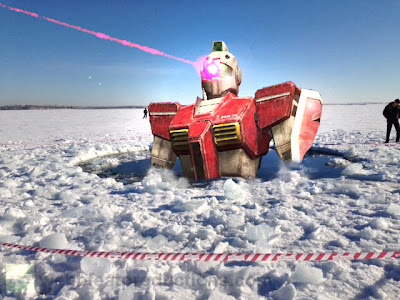 Posted by Steve Douglass at 11:50 AM No comments:

A meteor streaked across the sky above Russia's Ural Mountains on Friday morning, causing sharp explosions and injuring more than 500 people, many of them hurt by broken glass.

"There was panic. People had no idea what was happening. Everyone was going around to people's houses to check if they were OK," said Sergey Hametov, a resident of Chelyabinsk, about 930 miles east of Moscow, the biggest city in the affected region.

"We saw a big burst of light then went outside to see what it was and we heard a really loud thundering sound," he told The Associated Press by telephone.

Another Chelyabinsk resident, Valya Kazakov, said some elderly women in his neighborhood started crying out that the world was ending.

Some meteorites -- fragments of the meteor -- fell in a reservoir outside the town of Cherbakul, the regional governor's office said, according to the ITAR-Tass news agency. It was not immediately clear if any people were struck by fragments.

Meteors typically cause sizeable sonic booms when they enter the atmosphere because they are traveling much faster than the speed of sound. Injuries on the scale reported Friday, however, are extraordinarily rare.

The Emergency Ministry said more than 500 people sought treatment after the blasts and that 34 of them were hospitalized. Many of the injuries were from glass broken by the explosions.

Kolesnikov also said about 6000 square feet of a roof at a zinc factory had collapsed. There was no immediate clarification of whether the collapse was caused by meteorites or by a shock wave from one of the explosions.

Reports conflicted on what exactly happened in the clear skies. A spokeswoman for the Emergency Ministry, Irina Rossius, told The Associated Press that there was a meteor shower, but another ministry spokeswoman, Elena Smirnikh, was quoted by the Interfax news agency as saying it was a single meteor.

Amateur video broadcast on Russian television showed an object speeding across the sky about 9:20 a.m. local time, leaving a thick white contrail and an intense flash.

Russian news reports noted that the meteor hit less than a day before the asteroid 2012 DA14 is to make the closest recorded pass of an asteroid -- about 17,150 miles.

Posted by Steve Douglass at 5:16 AM No comments: