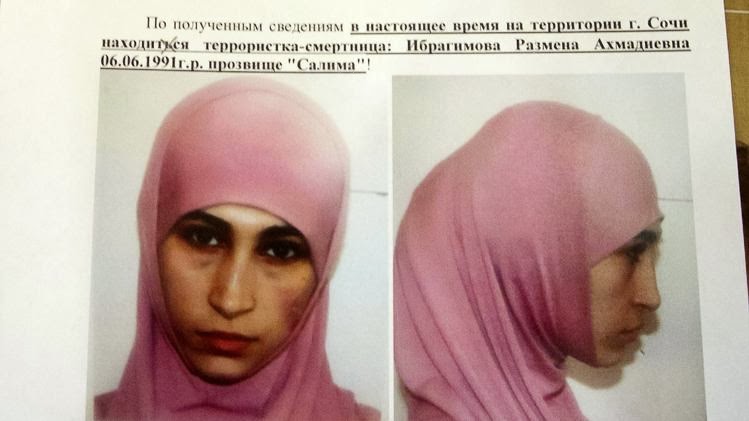 SOCHI, Russia — Russian security officials are hunting down three potential female suicide bombers, one of whom is believed to be in Sochi, where the Winter Olympics will begin next month.

Police leaflets seen by an Associated Press reporter at a central Sochi hotel on Tuesday contain warnings about three potential suicide bombers. A police letter said that one of them, Ruzanna Ibragimova, a 22-year-old widow of an Islamic militant, was at large in Sochi.


A U.S. congressman who was in Sochi on Tuesday to assess the situation said he was impressed by the work of Russian security forces but troubled that potential suicide bombers had gotten into the city, despite all of the extraordinary security measures.

“We know some of them got through the perimeter,” Rep. Michael McCaul, chairman of the U.S. House Homeland Security Committee, told The Associated Press. “She’s for real. What we don’t know is how many more black widows are out there.”

Russian authorities have blamed the so-called “black widows” of slain insurgents for previous suicide attacks in the country.

The Black Sea resort town will host the games amid concerns about security and potential terrorist attacks.
Posted by Steve Douglass at 3:42 PM No comments:

RT: We were all looking at the president’s speech the wrong way.

It was billed as a major speech on reform to the nation’s intelligence programs. But although some genuine reforms were introduced, the speech really wasn’t about reform. It was about saving the NSA’s most controversial tactic, as revealed by Edward Snowden, which is to “collect it all.” Build the haystack, and then find the needle.

Of all the Snowden disclosures thus far, it’s the very first one that’s still most significant: the NSA is running a domestic spying program based on the collection and storage of virtually all Americans' telephone metadata.

The White House and spy chiefs deny it is a domestic spy program – a denial the President reiterated in his ‘reform’ speech. But their denials are belied by former CIA Director Michael Morrell, a member of the president’s own NSA review panel, who admitted to the Senate Judiciary Committee a few days before the speech, "There is quite a bit of content in metadata. When you have the records of the phone calls that a particular individual made, you can learn an awful lot about that person."

But here’s the thing about that program: it has an expiration date – something the White House was keenly aware of heading into the ‘reform’ speech.


Just as the telephone spying program is the most jaw-dropping NSA disclosure; it’s also the program most in peril. Already one federal court has ruled it likely unconstitutional. Back in July, the House of Representatives came within a handful of votes of killing the program – and that was before an entire autumn and now winter of more disclosures.

A prominent coalition of powerful Senators on both sides of the aisle is pushing to end the program, too. So there are a lot of pitchforks pointed at it.

So that’s what President Obama, a fierce defender of the telephone spying program and Commander in Chief of the nation’s intelligence operations, was facing when he stepped to the podium in the Department of Justice’s Great Hall. And it’s why his ‘reform’ speech that followed was actually a Trojan horse containing a last-ditch effort to save the NSA’s “collect it all” telephone spying program.

Yes, the president said he is, “ordering a transition that will end the Section 215 bulk metadata program as it currently exists.” But he didn’t do that. Instead he took the primary concern of NSA critics, which is the collection and storage of Americans telephone data, and severed it in two, by focusing strictly on the storage of that data – not the collection of it.

He pushed for a tinkering of the program that would retain the bulk collection of Americans’ telephone (meta)data, but, “without the government holding this bulk metadata.” Instead, private telecoms or some sort of “third party” would retain the databases. It’s up to the attorney general, the intelligence community, and Congress ultimately to figure out how to make it work, which could be difficult since the telecoms don’t want this responsibility and it’s hard to imagine a trustworthy “third party” capable of retaining these databases, short of the ACLU or Electronic Frontier Foundation.

However, the important thing to remember is, no matter who’s holding the databases, those databases are still being filled with nearly every single American’s phone data. The government may have to deal with more restricted access to these databases in the short-term, and lose ownership of them altogether in the long-term, but indiscriminate bulk collection will continue indefinitely.

This convenient distinction wasn’t lost on those who know the NSA best and have blown the whistle on it. Speaking at the National Press Club within an hour of the President’s ‘reform’ speech, NSA whistleblower Kirk Wiebe called it a “ruse,” adding, “It’s not where the data is. It’s a red-herring to say if the NSA doesn’t have it, it’s safe. Not true.”

Another NSA whistleblower, Bill Binney, criticized the speech saying that any approach that “still maintains bulk collection is the wrong way to do it.” Yet that’s exactly the approach President Obama took – with good reason.

READ THE STORY AT RT
Posted by Steve Douglass at 9:31 AM No comments: