Cyber Monday Deal: The Interceptors Club at a great price 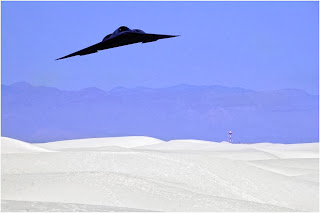 Somewhere in the wilds of New Mexico, at a secret air base, they have built the ultimate unmanned stealth warplane.

It is invisible on radar.

It can fly rings around any fighter jet.

It is armed with exotic pulse-weaponry...

That's the premise behind my novel, The Interceptors Club and the Secret of The Black Manta, a work of fiction, loosely based on my many years of actual experience "stealth chasing" for publications such as Aviation Week & Space Technology Magazine, Popular Science and Aircraft Illustrated.

From young readers and adults, no matter your age, you will like The Interceptors Club & the Secret of the Black Manta.

It is a fun, intriguing and wild trip into the Black World where five teenage hackers go toe-to-toe with real spies, playing by adult rules.


From page one, you’ll be immersed in a shadow-world that exists secretly, right alongside this one, filled with dark sinister characters, stealth technology and hidden radio-waves that carry on them secret messages for espionage agents hiding in plain sight.


The Interceptors Club & the Secret of the Black Manta is a character-driven, techno-thriller for our times.


It’s also a great book for sons and their dads.


No vampires or witches- but a cool-techie-tale - intended to get young men reading again.


I hope you’ll consider purchasing my e-book!
“The Interceptors and the Secret of the Black Mantra has a story line more like reality than fiction. Personally I never read fiction novels. But of course it's targeted toward a younger generation.


I think it would be a good motivator for up and coming engineering / aviation types. The realistic Black World "lingo" is refreshing. If I had this book when I was in the 8th grade, that would have been "Way Cool". - Dan Freeman

Review by: Phil Patton: "This is a thriller with a human side. It is all about secrecy and the mystery of technology and the sinister and the innocent. I would compare it to another novel that might come as a surprise: To Kill A Mockingbird.


Why? Because both books take on deep and important issues through the eyes of kids. In TKAM it is race, here it is the nature of knowledge and suspicion.

As someone who has seen government and organizations at work, I sense truth and insight here. Highly recommended. Many stars!

Just finished reading the book, started this morning and couldn't stop. The book is a very interesting read with some useful technical points about Stealth and how it has evolved. It still has an "Iron Eagle meets Stealth" feel to it. I enjoyed it, the story has more technical accuracies than Iron Eagle.

The Black Projects structure and procedure depicted is a believable concept but who knows? Every project is different with different goals.


It kept me interested. And I agree or enemies should very much consider the capability of our military before they shake a stick at us.

I'm a former F-117A mechanic and I enjoy all books related to Stealth.


Posted by Steve Douglass at 7:16 AM No comments: