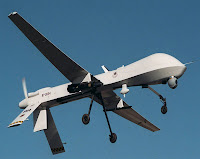 Revelations that Iraqi Shiite militants use cheap software available online to tap into live video feeds from Predator drones is just the latest indication of insurgents’ tech savvy – and ability to adapt to American military advances.

The Wall Street Journal reported Thursday that militants used a $25.95 program called SkyGrabber – software meant to give users the ability to snatch music and videos that others are downloading – to see what the $4.5 million Predators flying over the region were sending back to US military command.

The insurgents weren’t able to hack into the Predator system or disrupt the video feeds, according to military officials. The Pentagon is now taking steps to encrypt the video recorded by the spy planes.

Drones have become a key tool in the US wars in Iraq and Afghanistan – as well as counterterrorism operations in Pakistan and Somalia – because they can monitor targets for a long period of time and deploy missiles by remote, with pilots sitting in bases as far away as Arizona.

The tapping into the video feeds – which gives Iraqi militants valuable insights into the targets the US military is watching – is not the only reported flaw in the pricey US military fighting system. In a March 16 article, The New York Times reported that the controls in the Predator command centers were “clunky” as the “missile-firing button sits dangerously close to the switch that shuts off the plane’s engine.”

Many Predator drones have crashed in Iraq and Afghanistan and drone strikes in Pakistan that have led to civilian deaths have drawn sharp criticism. Despite this, Predators are part of a first wave of an increasingly-used technology.

But as US military technology advances, its enemies find innovative ways to keep up.

Insurgents in Iraq have long used the Internet in their fight against the Americans – not only to recruit new militants but also to quickly spread and distribute training manuals. Roadside bomb-makers adapted to US military detection methods by employing bigger bombs and deadlier explosively-formed penetrators, or EFPs. When it became difficult for male suicide bombers to get close to key targets, militants started deploying women who were less likely to be searched.

“If anything, I think the enemy, being smaller and less bureaucratic, tends to be more technologically agile than us," writes Thomas Ricks, the former Washington Post military reporter, on his national security blog. He writes of seeing solar collectors in an Al Qaeda command and control bunker in Afghanistan in 2001.

"From the wires I could see it looked to me like they used it to power their communications. Anyway, solar power sure beats carry hauling batteries up the pathways along those 10,000-foot-high razorback ridges,” he added.

In fact, the Wall Street Journal report suggests that military officials knew about the problem for years but "the Pentagon assumed local adversaries wouldn't know how to exploit it."

In a 2007 USA Today article about the evolution of the improvised explosive device, or IED, retired Marine Gen. Anthony Zinni reflected on the pace at which insurgents adapted in Iraq.

"This is the first war where we've faced an enemy that's adapted better than we have at a tactical and operational level.”


RELATED LINK
Posted by Steve Douglass at 8:40 PM No comments: