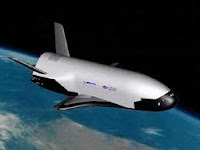 11/30/2010 - VANDENBERG AIR FORCE BASE, Calif. -- Preparations for the first landing of the X-37B are underway at Vandenberg Air Force Base.

Space professionals from the 30th Space Wing will monitor the de-orbit and landing of the Air Force's first X-37B, called the Orbital Test Vehicle 1 (OTV-1). While the exact landing date and time will depend on technical and weather considerations, it is expected to occur between Friday, December 3, and Monday, December 6, 2010.

RELATED LINK
Posted by Steve Douglass at 8:03 AM No comments:

ANCHORAGE, Alaska —
The Air Force has suspended recovery efforts for the F-22 jet that crashed Nov. 16 near Cantwell. The Air Force has recovered the remains of the pilot, Capt. Jeff Haney.

Air Force officials say they have cleaned up the crash site as much as they can, but that any debris found in the area should not be handled due to the hazardous materials used to construct the plane. They say visible pieces of the wreckage have been removed from the site.

Officials say the materials used in the plane could irritate skin or cause a rash, and that other parts of the plane that may be exposed by wind or water could contain pressurized gases or flammables.

A call center has been established at (907) 552-9321 for anyone who finds debris that may be part of the aircraft, so trained technicians can recover the material safely and minimize any long-term impact to the environment.
Posted by Steve Douglass at 7:59 AM No comments: