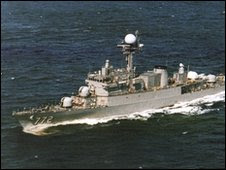 About 40 sailors are missing after a South Korean navy ship sank near the border with North Korea, Yonhap news agency said citing military officials.
The patrol vessel, with 104 people aboard, sank after an unexplained explosion tore through its hull.

Several sailors also died, officials are quoted saying as divers prepared to return to the scene after daybreak.
South Korean officials played down earlier reports that it may have been the result of an attack by North Korea.
There was no sign of the North's military in the area where the ship sank, Yonhap said citing officials.

The military earlier said 58 sailors were rescued from near Baengnyeong island by several navy and coastguard vessels.
South Korean President Lee Myung-bak, who had convened an emergency meeting of security officials, had ordered the military to focus on rescuing the sailors, Yonhap news agency reported.
The police force was put on heightened alert in the capital, Seoul.
The Cheonan, a 1,200-tonne corvette, began sinking about 2130 local time (1230 GMT) on Friday, after an explosion, the South Korean Navy said.

A South Korean presidential spokeswoman said it was premature to say what caused the Cheonan to sink.
Strained ties

There were reports that another South Korean ship had fired shots toward an unidentified ship in the North following the alleged torpedo attack.
One report, quoting the joint chiefs of staff, said the target turned out to be a flock of birds.

The apparent clash comes at a time of tension between the two Koreas. International talks aimed at ending the communist nation's nuclear ambitions have been stalled for months. 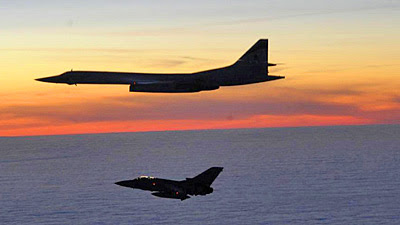 According to the Ministry of Defence RAF (Royal Air Force) jets scrambled to intercept two Russian nuke bombers after illegaly entering British airspace on the 10th March. The alleged violation of airspace is the 20th such incident since the beginning of 2009.

The Russian Blackjack bombers flew over the west coast of Scotland in the early hours of March 10, said the MoD. Two RAF Tornado F3 fighters were sent to intercept the Russian bombers.

“This is not an unusual incident and people may be surprised to know that our crews have successfully scrambled to intercept Russian aircraft on more than 20 occasions since the start of 2009, said Wing Commander Mark Gorringe.
Moscow has denied the allegations made by the British Ministry of Defence, nevertheless admitting that “The Tu-160 strategic bombers did indeed do an overflight over the Arctic Ocean and the Atlantic on March 10″.

“All flights of Air Force aircraft were and are fulfilled in strict compliance with the international rules on the use of airspace over neutral waters, without violation of other states’ borders,” the Russian Air Force spokesman added.

The Tupolev TU-160 is a heavy bomber which was first deployed during the last years of the Soviet Union. Pilots of the Tu-160 call it the “White Swan”, due to its maneuverability and anti-flash white finish. The aircraft is capable of holding 40,000 kg of free-fall weapons or a rotary launcher for nuclear missiles.

On 12 October 2008 a number of Tu-160 bombers were involved in the largest Russian strategic bomber exercise since 1984. A total of 12 bombers including Tu-160 Blackjack and Tu-95 Bear conducted a series of launches of their cruise missiles. Some bombers launched a full complement of their missiles. It was the first time that a Tu-160 had ever fired a full complement of missiles. Russia has at least 16 TU-160 currently in service. 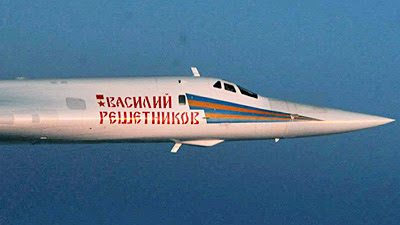 Posted by Steve Douglass at 6:05 AM No comments: