The 36-foot-long plane came down in a “sparsely populated” area and no one was injured on the ground, an Air Force release said. A board of officers is investigating what led the accident.

The Reaper had been flying a test mission after taking off from Gray Butte Airfield, about five miles east of El Mirage. Both airfields are about 15 miles south of Edwards Air Force Base, Calif.

The aircraft was assigned to the Aeronautical Systems Center headquartered at Wright-Patterson Air Force Base, Ohio.

Since the service began flying MQ-9s in 2004, at least eight of the planes have crashed, according to the Air Force Safety Center. The planes, equipped with sensors, cost about $13 million each. Most of the 50 Reapers not required for stateside training or testing are deployed to fly missions over Afghanistan and Iraq.
Posted by Steve Douglass at 6:23 AM No comments:

You say you want an evolution ... 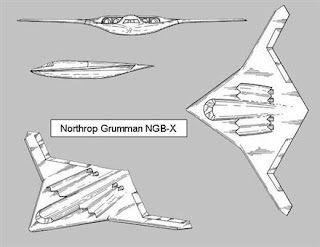 The latest analysis of future long-range strike needs by the Pentagon will be submitted in time for its recommendations to be reflected in the Fiscal 2012 budget.

Few people, least of all advocates of an active, nonvintage bomber fleet, expect exciting news. Service-centric politics, a joint-service construct under which ground forces heavily influence the study and pressure on procurement budgets (from overruns in the Joint Strike Fighter program) will result in modest recommendations.

The most likely include the endorsement of a long-range, nonnuclear ballistic missile capability, although the time scale and budget remain uncertain. The conventional prompt global strike (CPGS) concept is a favorite of Marine Corps Gen. James Cartwright, vice chairman of the Joint Chiefs.

Expect some backing but little money for two other concepts: a joint-service, long-range cruise missile, launched from Virginia-class submarines and B-52s, and the Navy’s Unmanned Combat Air Vehicle (UCAV-N), which may be termed a means of extending the range of a carrier air group. Both systems may be linked to another joint-service study defining a future “air-sea battle” and focused on matching China’s growing power in the Western Pacific.

As for a future USAF bomber, conventional wisdom—i.e., views acceptable to Cartwright and Defense Secretary Robert Gates—is that the idea merits study, over and above several dozen studies carried out in the past decade. In June, Lt. Gen. Philip Breedlove, Air Force deputy chief of staff for operations, plans and requirements, was quoted as saying the word “bomber” can no longer be spoken in the Pentagon and requirements “trickling down from the highest levels” call for a much smaller aircraft. Some sources believe Cartwright is pushing the idea of a USAF variant of UCAV-N.

Air Force Chief of Staff Gen. Norton Schwartz and Secretary Michael Donley have not taken up the cause of a new bomber. The only four-star to support the bomber has been Strategic Command leader Gen. Kevin Chilton.

With little high-level support, bomber advocates are doing what they have done before: changing the name to “reconnaissance-strike.” Lt. Gen. David Deptula, in his last press briefing before retirement, reiterated his view that intelligence, surveillance and reconnaissance (ISR) and attack missions are no longer separate. A penetrating ISR platform that cannot be armed makes little sense.

Industry and service studies of a new ISR and strike platform appear to be converging, driven by technological developments, likely operational requirements and fiscal realism.

Technologically, one factor that has arisen in the past few years is the successful demonstration of extremely low-observable (ELO) technology, with wideband, all-aspect signature reductions of -40 to -50 dB. or more, under one or more covert test programs. One step in this process may have been Boeing’s Bird of Prey demonstrator, with a radar cross section (RCS) so small that visual signatures became dominant. A consultant on that project was stealth pioneer Denys Overholser, who has been involved with projects envisioning RCS levels to -70 dB.—the size of a mosquito.

ELO mandates an all-wing or blended-wing body and tailless, subsonic configuration with buried engines. Advances in the computational analysis of the complicated airflows over such shapes improve aerodynamic efficiency and permit simpler inlet and exhaust systems, putting unrefueled ranges of 5,000 nm. within reach for a “demi-B-2”-sized aircraft.

READ THE REST OF THE ARTICLE HERE
Posted by Steve Douglass at 6:18 AM No comments: