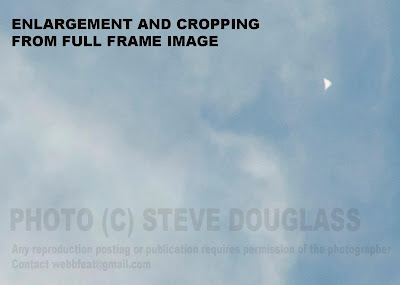 In our group was a cop - three were computer techs (including myself) another was a NWS employee - a meteorology student (who works at the local National Weather Service ) - one was a teacher - another is an Amarillo Emergency Service volunteer.

That said - we call ourselves ASAP - for Amarillo Society of Aviation Photographers. We meet almost every Saturday to have lunch and photograph what ever pops into the airport.

Saturday was no exception - and in fact we were treated to a visit (quick turn) by two F/A 18s - one painted in Russian Aggressor colors and an E2C Hawkeye. Not to mention we shot photos of the one of many V-22s out on test hops from the Bell Textron plant just up the road.

One of the photogs (Jay McCoy) caught sight of a glint - way up in the atmosphere and said, "What the heck is that?"

We all turned to see it. It was almost straight up - maybe five degrees off 12:00 o'clock position a little to our west.

The object was almost in the sun - but it glinted bright.

At first sight I thought it was a star visible in daylight - and not much more.

Someone in the group suggested it was the ISS - but it appeared not to be moving - only glinting.

You could not tell what it was with the naked eye - or a 300mm lens for that matter - but it was very bright.

I was backing up to get a better view of it - and promptly fell off a concrete step (about a drop of two feet) almost loosing my camera. Fell right on my arse I did.

Everyone helped me up - asked if I was OK - I was.

I was more concerned about protecting my camera gear than myself. I only suffered a sore ankle and some wounded pride.

Anyway, once my dignity had been restored - we all looked up back up into the sky - we could no longer see the object. Either clouds that were moving in obscured it - or it had otherwise left our view.

I didn't think much more about it - until I got home and loaded up the images into my computer.

Full EXIF data and the raw images are available on request for analysis by qualified persons and media.

All images copyright (C) Steve Douglass and require permission for re-posting or publication. 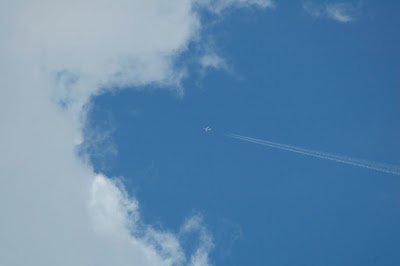 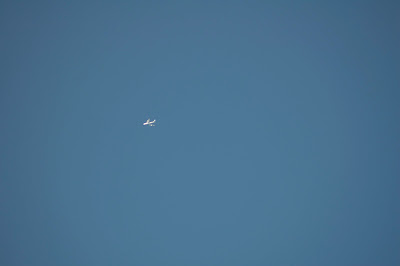 Posted by Steve Douglass at 5:32 AM 3 comments:

(CNN) -- A French Mirage 2000 jet fighter collided with a Lithuanian plane during a training mission Tuesday in Lithuania, the French Defense Ministry said.

No one was hurt during the training exercise at an air force base in Siauliai, Northern Lithuania, military officials from both countries said.