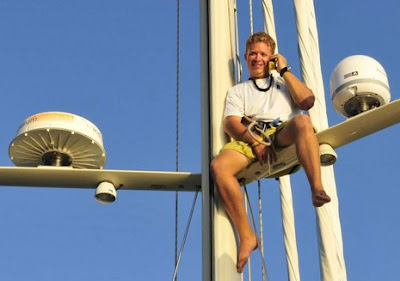 Satcom provider Iridium has been suggesting a useful application for its system in combating the Indian Ocean pirate threat.

Iridium says that one tactic that has proven effective has been for the crew, when attacked, to disable the ship’s propulsion plant and barricade themselves inside a pre-prepared ‘citadel’– a hardened safe room - that pirates cannot break into. There, the crew can wait for rescue from naval patrols without exposing themselves to danger in a crossfire between their captors and rescuers.

A key element in this strategy is a reliable communication link the crew can use from inside the citadel to inform patrolling naval forces that they are under attack. This can be difficult, since the pirates onboard can quickly disconnect the ship’s primary satellite and radio antennas. Iridium suggests that there needs to be a separate dedicated, secure satellite phone line to the citadel with a concealed installation above decks. To that end, Iridium is working with its service partners to develop and deploy satellite phone solutions specifically designed for this application.

According to Iridium, as from 28 February, the International Maritime Bureau Piracy Reporting Center reported that pirates were holding 33 merchant vessels and 711 crewmembers pending ransoms. In 2011 alone, these gangs captured 13 ships and 243 hostages - an average of more than one ship per week. The seafarers are being used as human shields to forestall rescue attempts by military teams, and are being subjected to increasing levels of severe mistreatment by their captors – including torture and even execution. Despite the presence of scores of warships from multiple navies, the area of operations is too vast for them to prevent attacks, and a military response after the seizure only puts the hostages in greater danger.
Posted by Steve Douglass at 6:04 AM No comments: