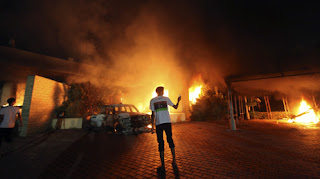 Reuters) - In the months before the deadly attack in Benghazi, Libya, U.S. and allied intelligence agencies warned the White House and State Department repeatedly that the region was becoming an increasingly dangerous vortex for jihadist groups loosely linked or sympathetic to al Qaeda, according to U.S. officials.
Despite those warnings, and bold public displays by Islamist militants around Benghazi, embassies in the region were advised to project a sense of calm and normalcy in the run-up to the anniversary of the September 11 attacks in the United States.
So brazen was the Islamist presence in the Benghazi area that militants convened what they billed as the "First Annual Conference of Supporters of Shariah (Islamic law)" in the city in early June, promoting the event on Islamist websites.
Pictures from the conference posted on various Internet forums featured convoys flying al Qaeda banners, said Josh Lefkowitz of Flashpoint-Intel.com, a firm that monitors militant websites. Video clips showed vehicles with mounted artillery pieces, he added.
A research report prepared for a Pentagon counter-terrorism unit in August said the Benghazi conference brought together representatives of at least 15 Islamist militias. Among the paper's conclusions: these groups "probably make up the bulk of al Qaeda's network in Libya."
Drawing on multiple public sources, the Library of Congress researchers who drafted the paper also concluded that al Qaeda had used the "lack of security" in Libya to establish training camps there. It also reported that "hundreds of Islamic militants are in and around Derna," where special camps provided recruits with "weapons and physical training."
President Barack Obama's administration has repeatedly said it had no specific advance warning of an attack like the one that killed Ambassador Chris Stevens and three other Americans in Benghazi on the night of September 11.
But the reports of militants' growing clout in eastern Libya, and attempts by violent jihadists to take advantage of fragile new governments across northern Africa following the Arab Spring, appear to raise new questions about whether U.S. embassies took proper security precautions, and if not, why not.
Washington has not definitively placed responsibility for the Benghazi attack on specific individuals or groups among the jihadist factions believed to be operating in or near Libya.
But U.S. officials have said that within hours of the Benghazi attacks, information from communications intercepts and U.S. informants indicated members of at least two groups may have been involved.
One is an al Qaeda offshoot, al Qaeda in the Islamic Maghreb or AQIM, which was founded in Algeria and has region-wide ambitions. The other is a local militant faction called Ansar al-Sharia, which apparently has arms both in Benghazi and in Derna, long a hotbed of radicalism.
Like other militants seeking to take advantage of democratic openings and fragile governments created in last year's Arab Spring, the two groups are apparently seeking to exploit instability in Libya after the fall of dictator Muammar Gaddafi.
The links between these groups, other jihadist organizations and the original core al Qaeda militant group founded by the late Osama bin Laden are murky at best, U.S. officials and private analysts say.
"There is a complex mosaic of extremist groups in North Africa," a U.S. counterterrorism official said. "Given AQIM's interest in expanding its reach, it's not surprising that the group is trying to gain a foothold in Libya."
While hardly sweeping the continent, violent extremist groups appear to have found ungoverned safe havens across north Africa, from Mali in the west to Egypt's Sinai in the east.
In the last month, U.S. embassies in Egypt, Tunisia and Yemen have also witnessed violent attacks.
Questions have been raised about security precautions at diplomatic facilities in those countries as well.


READ THE REST OF THE STORY HERE
Posted by Steve Douglass at 4:35 PM No comments:

At least eleven military explosions have occurred Monday and Tuesday, a minimum of ten large-caliber ammunition ground-rattling explosions from a Louisiana Military Department bomb recycling plant in the northwestern Louisiana forcing evacuations of at least 600 students, over 400 prisoners and 800 residents of Doyline, and one militaryexplosion injuring a man in Alabama.

"[C]itizens were shaken out of bed and windows were shattered during the late night hours Oct. 15," according to Accuweather.
Jesse Ferrell with Accuweather pulled 3D radar images from GRLevelX software this morning of the "mystery object."
The blast and resulting fire at the underground Explo Systems site at Camp Minden resulted in authorities asking residents of the eastern section of Doyline to leave the area, according to AP.
After the initial blast, more explosions followed about every 10 minutes as the fire was allowed to burn, AP says.
The units where the explosions reportedly cam from are self-contained, partially underground and designed to send any blast upward and not outward to minimalize damage.
Windows shattered in Dixie Inn and Minden.
Sheriff Gary Sexton said home video surveillance cameras as far as 25 miles away captured the sound of the explosion and a glow in the sky.
Officials say they have no idea what caused it to blow.
Explo Systems opened its site in January with a military contract to disassemble bombs and recycle bomb components. It has had other recent explosions at Camp Minden.
The National Guard oversees Camp Minden, its newest military training site.
Camp Minden is a former Louisiana Army Ammunition Plant that produced large-caliber ammunition for the military until closing in 1994.
The facility says on its website:

In 1941, the Federal Government acquired 15,868 acres of farms, farmland and private lands for construction of The Louisiana Army Ammunition Plant (LAAP). In January 2005 the entire area that formally belonged to the U.S. Government as LAAP totaling 14,995 acres was deeded over to the State of Louisiana under the control of the Louisiana Military Department.

"Louisiana took the site over from the federal government last year and it is now occupied by several businesses," says AP.
According to many residents, something come down instead of something blow up.
Posted by Steve Douglass at 11:42 AM No comments: 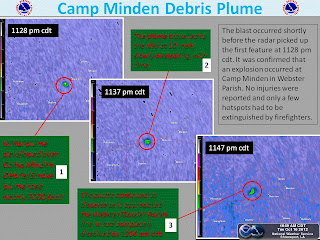 A bunker at a northern Louisiana military compound exploded late Monday, briefly prompting speculation that the loud boom and shaking ground had been caused by meteorite .

“The bunker did exactly what it was designed to do," said Webster Parish Sheriff's Chief Deputy Bobby Igo, Jr. "There were no injuries - nobody hurt. We don't know the cause at this point,” he told the Minden Press-Herald.
Residents had been scrambling to figure out what caused the massive boom, which broke windows and rattled homes and businesses around 11:30 pm CST. The blast shook a five mile area from Minden to Dixie Inn, about 30 miles from Shreveport.

The U.S. Geological Survey had no reports of earthquakes in the area and natural gas plants in the region said they had not suffered any explosions.
Some local officials guessed the incident could have been caused by a meteorite, noting that the Earth is currently being peppered by a meteor shower spawned by the famous Halley’s Comet.


But a NASA official told the Daily News the space agency was doubtful a meteorite caused the damage and did not expect to investigate.
“They hit everywhere, all the time,” NASA spokesman Steve Cole said of meteorites. 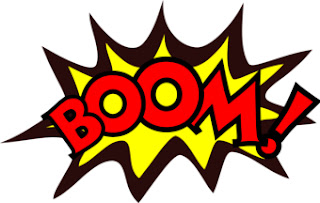 Finally, by Tuesday morning, Camp Minden confirmed they had been the source of the blast, which is still under investigation.  The bunker belongs to a company called Explo, officials said.

Posted by Steve Douglass at 9:51 AM No comments:

WEBSTER PARISH, LA (KSLA) - Webster Parish Sheriff Gary Sexton tells us they "definitely had something happen" in Webster Parish Monday night.  Sheriff Sexton confirms all of the explosion manufacturing facilities and natural gas facilities in Webster Parish have been ruled out as the source.
Sheriff Sexton adds that there is a "possibility that a meteor did hit the ground" in the area, but deputies have not pinpointed an exact location.  He does suspect it happened in a secluded area between Minden and Dixie Inn.
Sheriff Sexton said, first thing Tuesday morning, he will dispatch helicopters in the air to look for any damage.
KSLA News 12 viewer Shana Levick tells us she was driving on I-20 by Dixie Inn when she saw the sky light up a bright orange color.  She said she could see what appeared to be small fire sparks above the tree lines.
Another witness near Dixie Inn told KSLA News 12 photographer Cody Jennings that he saw something flash across the sky streaming from the west or southwest direction.  That witness also reported seeing a bright flash that lasted for a while.
Authorities are investigating a loud boom that shook homes across Northwest Louisiana Monday night.
We are getting reports that people heard an explosion just before 11:30 p.m. from areas including: Minden, Doyline, Haughton, South Bossier and Shreveport.  Callers are also reporting seeing a bright light flash in the sky when they heard the boom. Officials with the Webster Parish Sheriff's Office tell us they have crews searching for the source of the noise.
This story is developing. We will update this story as we learn more.
Copyright 2012 KSLA. All rights reserved.

Posted by Steve Douglass at 5:11 AM No comments: