Shuttle makes big catch in space: "The space shuttle Atlantis has caught up to Hubble. Later today, the crew will use the shuttle's robot arm to hook the giant space telescope and place it in the cargo bay for repairs. Five spacewalks are planned to make upgrades to extend Hubble's lifespan through at least 2014.

Posted by Steve Douglass at 1:48 PM No comments:

The Pentagon just released the first of reams of paperwork regarding the Fiscal 2010 budget. Here's a list of what the landscape looks like for rotary wing aviation programs:

The U.S. Army is seeking $370M to remanufacture eight of its National Guard AH-64A aircraft into the Longbow, Block III configuration.

For CH-47, the Army request is for'the acquisition of 39 aircraft, of which 25 will be new build and 14 remanufactured under the Service Life Extension Program. There's $10.8M in research, development, test and evaluation (RDT&E) funds and $1.05B in procurement.

For the Light Utility Helicopter program, $326M for 54 aircraft, which is a continuation from Fiscal 2009.

The five-year multiyear procurement program on Blackhawk UH-60M, which began in 2007, looks secure. In fact, the Air Force will buy two H-60Ms itself to add to 95 HH-60G Pave Hawks now in service. Specialized mission systems will be added later so that they are optimized for the combat search and rescue mission, service officials there told AvWeek's Amy Butler.

Overall, the helo budget request supports continuation of 83 aircraft. The total request is for $1.46B.

The budget requests support for procurement of 30 MV-22 and 5 CV-22 aircraft. The objective is 458 (with 50 going to Air Force special operations and the rest to the Navy/Marine Corps.) The total request is for $2.86B - $2.3B for Navy procurement and $451 for Air Force procurement (the rest is RDT&E).

The H-1 upgrade program, which includes the Huey and Super Cobra, is requesting money for production of 30 aircraft (16 UH-1Y new builds, 12 AH-1Z remanufacutred aircraft and 2 new build AH-1Zs). The total request is for $868M.

Posted by Steve Douglass at 1:47 PM No comments:

Osprey in the canyon 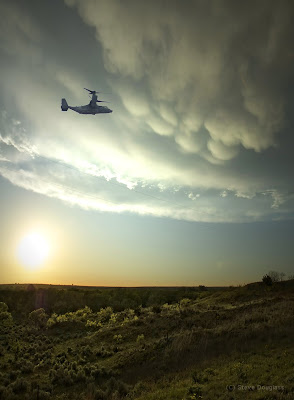