(CNN) -- The social networking site Facebook on Monday pulled a third-party application that allows users to create polls after a site member built a poll asking if President Obama should be killed.

There are more than 350,000 applications on Facebook. The company says it disables any that violate its terms.

The U.S. Secret Service, the agency assigned to protect the president, has launched an investigation, agency spokesman James Mackin said.

"As is usually the case, our vigilant users reported it to us first," Facebook spokesman Barry Schnitt told CNN. "The USSS [Secret Service] sent us an e-mail late this morning PDT asking us to take it down. At that point, it had already been removed, and we let them know."

Schnitt said the application "was immediately suspended while the inappropriate content could be removed by the developer and until such time as the developer institutes better procedures to monitor their user-generated content."

Facebook allows third-party developers to create applications -- such as polls and quizzes -- which are then made available to Facebook users, who use the applications to create specific content. Users may choose to make their content available to the general population of Facebook or limit it only to their friends.

In this case, Schnitt said, the user made the poll asking whether Obama should be killed available to the general public.

The possible responses to the poll were "yes," "maybe," "if he cuts my health care" and "no."
Posted by Steve Douglass at 7:08 PM No comments:

B-1B crew to get Mackay Trophy for bombing run

B-1B crew to get Mackay Trophy for bombing run: "The Mackay Trophy is going this year to the crew of a B-1B Lancer bomber, credited with helping stop a remote base in Afghanistan from being overrun by insurgents.Earning the honor for flying the most meritorious Air Force mission of 2008 are Maj. Norman Shelton, Capt. Kaylene Giri, Capt. Louis Heidema, and Capt. Boyd Smith. At the time of the mission, all were assigned to the 37th Bomb Squadron at Ellsworth Air Force Base, S.D.The crew’s citation said 200 insurgents were trying to overrun Vehicle Patrol Base Wanat when the bomber, call sign ‘BONE 23,’ was sent to the base’s defense on July 13, 2008.At first, a joint terminal attack controller at the base requested a pair of 2,000-pound guided bombs. When the crew of BONE 23 realized the ground troops would be too close to the bomb explosions — ‘danger close,’ according to the crew — they suggested using 500-pound Joint Direct Attack Munitions bombs. Within 30 minutes, BONE 23 flew three bomb runs ‘decisively slowing the enemy attack, allowing coalition forces to regroup,’ the Mackay citation said.The four airmen will formally accept the award Nov. 2 during the National Aeronautic Association’s fall awards banquet.Other airmen honored with the Mackay Trophy include Henry 'Hap' Arnold, Eddie Rickenbacker, Jimmy Doolittle and Chuck Yeager."

Posted by Steve Douglass at 7:07 PM No comments:

Pilot error caused fatal F-16 crash: "Inexperience and disorientation during a night training flight led to the fatal crash June 22 of an F-16 Fighting Falcon in Utah, an Air Combat Command accident investigation board concluded in a report released Monday.Killed in the crash was Capt. George Houghton of the 421st Fighter Squadron from Hill Air Force Base, Utah.The report noted that while Houghton had 1,572 hours piloting military planes — primarily in T-6 Texans as a first-assignment instructor — he only had 156 hours in F-16s and was considered an inexperienced pilot.The fatal mission at the Utah Test and Training Range called for Houghton to fly a high-angle strafing run at night, the report said. Houghton had flown only five similar night attacks as the squadron prepared to deploy to Afghanistan.The report noted Houghton started his dive 4,000 feet above ground, about 2,000 feet lower than rules called for. Houghton could have spotted the mistake by checking cockpit readings.Because of darkness, Houghton may not have been aware of how low he was when the jet passed below 1,000 feet, the report said. There was no evidence he tried to bail out."

Posted by Steve Douglass at 7:06 PM No comments:

Iran tests another ballistic missile/trying hard to be feared. 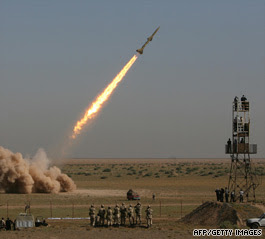 A short-range missile is test-launched during war games in Qom, Iran, south of Tehran, on Sunday.

"We are still waiting for new reports about the missiles and whether they have hit the targets or not," Brig. Gen. Hossein Salami, Iran's air force commander, said on Press TV. "These are ... advanced long-range missiles and they were manufactured by the ... Islamic Revolutionary Guard Corps."

The tests, which are expected to conclude later Monday, are codenamed "Payghambar-e Azam 4" or "The Great Prophet 4," Press TV said.

The Sajil-2 missile is a solid-fuel rocket with a similar range and has been launched twice before, in November 2008 and May 2009.

If true, the missile brings Moscow, Athens and southern Italy within striking distance.

At the time of the May launch, a White House official said actions in Iran were noteworthy. Watch analyst's view on missile tests, nuclear tensions »

"Of course, this is just a test, and obviously there is much work to be done before it can be built and deployed. But I see it as a significant step forward in terms of Iran's capacity to deliver weapons," said Gary Samore, special assistant to the president on nonproliferation.

The tests followed Iranian President Mahmoud Ahmadinejad's disclosure Friday that Iran was building a second uranium enrichment facility.
Posted by Steve Douglass at 4:54 AM No comments: