EVERETT, Wash.—Boeing Co.'s long-delayed 787 Dreamliner made its first flight Tuesday morning under cold, cloudy skies, a milestone for the company's marquee commercial-jetliner program, after more than two years of delays.

Boeing had been forced to scrap the first flight several times as it ran into costly design and manufacturing delays. Even on Tuesday, inclement weather and poor visibility had threatened to force another postponement. Each setback has cost the company dearly as it has had to pay penalties to its airline customers for delayed deliveries.

Boeing has staked the future of its commercial-airline business on the Dreamliner, which is considered the most sophisticated passenger plane ever built. Made of 50% carbon-fiber composite material, it is lighter than standard aircraft built of aluminum. Boeing says that will make the Dreamliner more efficient and durable.

The first Dreamliner test aircraft rolled down runway 34 Left at Paine Field at 10:28 a.m. and smoothly lifted off, heading north. Thousands of people, including hundreds of Boeing employees, plane enthusiasts and reporters, gathered at the airfield. The site also houses Boeing's wide-body jet factory, where the Dreamliners are assembled.

Though it was originally slated to fly in September 2007 with first deliveries scheduled for May of last year, Boeing struggled repeatedly to work out the kinks in the plane's cutting-edge design. The company also ran into problems with the Dreamliner's far-flung supply chain. Last fall, Boeing was hit by a two-month labor strike at its factory, adding to delays.
Posted by Steve Douglass at 1:04 PM No comments:

More press for "The Beast of Kandahar" UAV. 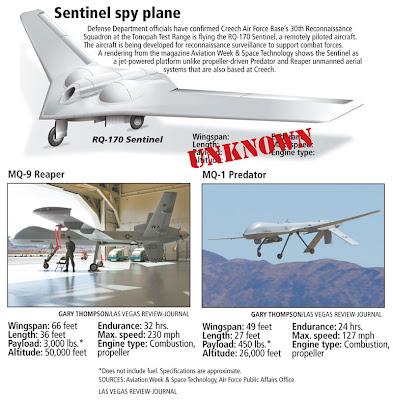 Its nickname is the "Beast of Kandahar," but the Air Force has officially dubbed it the RQ-170 Sentinel.

Whatever it is called in aviation or military circles, the Pentagon this month confirmed the existence of what experts are calling the latest addition to the Air Force's fleet of remotely piloted spy planes.

Like the much-publicized Predator and Reaper unmanned aerial systems, the Sentinel is home-based in Nevada and was probably tested at classified locations on the Nellis range, including Area 51, one private defense information expert said.

An Air Force spokesman said the Sentinel is being developed by Creech Air Force Base, specifically the base's 30th Reconnaissance Squadron at the Tonopah Test Range, about 150 miles northwest of Las Vegas. He said the squadron is part of the 432nd Wing at Creech, hub for the nation's remotely piloted military aircraft.

Andy Bourland, chief spokesman for the Air Force press desk at the Pentagon, declined to release photographs of the Sentinel or discuss anything beyond a four-sentence statement.

The statement reads in part that the Air Force "is developing a stealthy unmanned aircraft system (UAS) to provide reconnaissance and surveillance support to forward deployed combat forces."

"The RQ-170 Sentinel, a low observable UAS, was built by Lockheed Martin's Advanced Development Programs. The fielding of the RQ-170 aligns with Secretary of Defense Robert M. Gates' request for increased intelligence, surveillance and intelligence support to the Combatant Commanders and Air Force Chief of Staff General Norton Schwartz's vision for an increased ... reliance on unmanned aircraft," Bourland's statement reads.

A story in the trade publication Aviation Week & Space Technology reported that the Sentinel has been flying classified missions over Afghanistan and was photographed twice in 2007 at Kandahar's airport.

Last April, the stealthy unmanned aircraft was referred to as the "Beast of Kandahar" in a defense technology blog by veteran black projects researcher Bill Sweetman.

Aviation Week's latest article describes the Sentinel as a "tailless flying wing" with a wingspan similar to that of the rear propeller-driven MQ-9 Reaper, which has a wingspan of 66 feet.

The Reaper is the big brother of the MQ-1 Predator, but with the laser-guided missiles that the Predator fires, the Reaper can drop laser-guided bombs.

Both are workhorses in the wars in Afghanistan and Iraq and are in high demand by battlefield commanders.

They can be controlled by pilots and sensor operators via satellite links from ground stations at Creech and bases elsewhere in the United States.

John Pike, the director of globalsecurity.org, a military information Web site, said the Sentinel appears to be powered by a single jet engine so that it can fly at high altitudes and monitor large areas.

Pike said Pentagon planners probably are taking the next logical step to equip the Sentinel or a plane like it with munitions.

"If there isn't already an armed version of it, you would assume there would be," Pike said in a telephone interview Monday.

Assuming the budget for classified projects is as big as it was during the 1980s Strategic Defense Initiative -- "Star Wars" -- era of the Reagan administration, Pike said, aeronautical engineers are probably busy developing an array of unmanned aircraft at the classified installation not far from Creech on the dry Groom Lake bed known as Area 51.

The Sentinel appears to be a scaled- down version of the radar-evading B-2 Spirit bomber.

"It does look like the people who designed this have seen the stealth bomber somewhere along the line," Pike said.

As for incorporating a jet engine in the design, he said there's nothing particularly unique about unmanned platforms being jet-powered. Others include the RQ-3 DarkStar and the RQ-4 Global Hawk.

It would make sense, Pike said, to use the Sentinel for persistent surveillance, like a Predator that loiters out of sight, high above its targets, except the Sentinel would cover a wider area.

As such, the Sentinel, like the Reaper and the Predator, would be useful for tracking terrorists in Iraq who need sizable facilities to build roadside bombs that unleash explosive-shaped charges capable of piercing armor.

The Sentinel could serve as a regional surveillance system to cover potential terrorist activities in countries such as Pakistan, Iran, Somalia and Yemen.

Contact reporter Keith Rogers at krogers@reviewjournal.com or 702-383-0308.
Posted by Steve Douglass at 12:10 PM No comments: 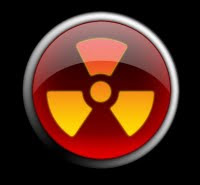 The Dhanush, which has a short range of 350 kilometers (220 miles), is a navy version of the surface-to-surface Prithvi missile and can carry both nuclear and conventional warheads.

The missile was successfully fired from a ship in the Bay of Bengal, said S.P. Das, director of Integrated Test Range, a unit of India's Defence Research and Development Organization.

"The test met all the requisite parameters," he said.

Last month, India conducted the first night-time test of a nuclear-capable, medium-range ballistic missile but the attempt failed.
Posted by Steve Douglass at 7:39 AM No comments:

KABUL, Afghanistan (Dec. 15) – An Afghan-international security force detained a Taliban commander and other militants in Zabul province today. The Taliban commander is linked to IED facilitation and is responsible for several attacks in the area.

The joint security force searched a compound in the provincial capital of Qalat where intelligence sources reported the commander to be located. The joint force searched the compound without incident and detained a few militants, one of whom identified himself as the targeted individual in the operation. No shots were fired and no one was harmed.

In another operation, security forces killed four militants Monday after observing the men emplacing an IED near the village of Charhar Bagh in Kandahar.

The ISAF unit ended the engagement when two insurgents fled into the village. ISAF believes no civilians were injured or killed in this operation but is investigating claims made to the contrary.

ISAF Casualty
An ISAF servicemember from the United States was killed today in an IED strike in southern Afghanistan.
-30-
Posted by Steve Douglass at 7:09 AM No comments:

The blast ripped through a market located near the house of a senior adviser to the chief minister of Punjab province, said the official, Mohammed Hasnain.

The adviser, Sardar Zulfiqar Muhammad Khosa, is a former provincial governor and a senior opposition party politician. He said he was the target of the attack, though police initially said he was not the intended target.
Khosa told CNN that none of his family members were in the house when the attack occurred. He also said that he had never before received any threats against his life.

The attacker detonated his car in front of the main gate at Khosa's house, said Hassan Iqbal, a senior government official.
About 20 shops in the market were left in heaps of rubble.
Posted by Steve Douglass at 6:26 AM No comments: